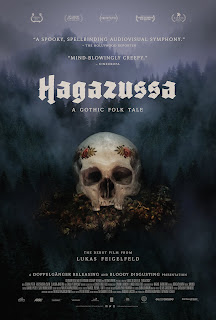 Set in 15th century Germany, Lukas Feigelfeld’s HAGAZUSSA is a stark tale of misogyny and ostracization. After her mother, a suspected witch, dies, Albrun (Aleksandra Cwen) is largely shunned by the nearby townfolk, tending her goats and raising her infant daughter. Surprising Albrun, one of the women from town, Swinda (Tanja Petrovsky) befriends her. But that friendship takes an ugly turn, resulting in horror and tragedy.


While the film alludes to witchcraft and the supernatural, they seem to function in a more symbolic manner. One should not necessarily take them as a reality in the world of the film. This especially the case once the film takes an overtly psychedelic turn in its third act.

While that’s a fair description of HAGAZUSSA, it can’t really be easily summed up in a synopsis. The film is measured and subdued, focusing more on atmosphere and theme than traditional action or plot. But even when it doesn’t seem as if much is going on, there’s a constant feeling of unease that eventually explodes into full blown horror.


Some have described HAGAZUSSA as Germany’s answer to THE WITCH. That is an oversimplification, as HAGAZUSSA is very much its own film, and one which draws very different conclusions. But it would be fair to say that if you found THE WITCH too slow moving or esoteric, you’re not likely to appreciate this film, either. This is unapologetically a film for those who prefer their horror on the arty and intellectual side, and I suspect among that crowd it will be met with considerable approval.
Posted by Bob Ignizio at 12:00 AM