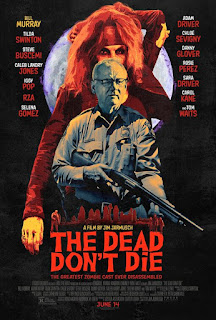 It’s too slow. That’s the common refrain I keep hearing from those who don’t enjoy the new Jim Jarmusch zombie film THE DEAD DON’T DIE. And yes, the film is as slow moving as a classic Romero zombie. It also has an extremely deadpan sense of humor, a tendency to go off on pointless tangents, and a sense of self awareness that is sure to grate on many viewers. So if you go into this movie hoping for anything close to a typical undead romp, there’s a high probability you will be disappointed. If, on the other hand, you’re a fan of Jarmusch’s quirky sensibilities, or are in general open to unusual, idiosyncratic cinema, this may be just the thing for your Halloween viewing pleasure.

As in most zombie films, the plot is fairly simple and straight forward. Dead people in the small town of Centerville (not explicitly stated to be in Ohio, but given the numerous references to Cleveland, a safe bet) are coming back to a horrific semblance of life. Aside from a strong desire to eat their fellow townspeople, these zombies each have other, more personal drives like a need for coffee or a strong desire to shop. A little odd, but still not that far from Romero territory.

It’s not so much the zombies that provide the weirdness here, though, as it is the living. Police officers Cliff Robertson (Bill Murray), Ronnie Petersen (Adam Driver), and Mindy Morrison (Chloe Sevigny) take the zombie apocalypse in an almost matter of fact way. Sure, they’re concerned, but they aren’t about to get hysterical just because there are flesh eating ghouls terrorizing their town.

But zombies rising from their graves isn't the only seemingly paranormal occurrence in Centerville. Over the course of the film, it also becomes apparent that Ronnie may well know what fate awaits him and his fellow officers, explaining his blasé attitude even if psychic powers alone wouldn’t explain why he keeps breaking the fourth wall. And what's up with Tilda Swinton's sword-wielding mortician?

Other notable cast members, each playing characters with their own quirks, include Tom Waits, Iggy Pop, Danny Glover, Steve Buscemi, Rosie Perez, Carol Kane, RZA, and Selena Gomez. One could almost count the film’s catchy title song, by neo-country singer Sturgill Simpson, as a character, too, as often as it plays.

Adam Driver’s character warns us several times that the movie is, “going to end badly,” and based on what I’ve read and heard from some others who have watched the film, a lot of viewers agree. Personally I thought the film ended just as it should. I certainly don’t agree that it just fizzles out, as some have argued. At least not any more than a good portion of other zombie films.

I get the hate, though. This is a movie that couldn’t care less about satisfying audience expectations. I enjoyed it a lot, but there’s no way I can promise anyone else will feel the same. What I can tell you is, even if you've seen every other zombie movie out there, you haven't seen one quite like this.