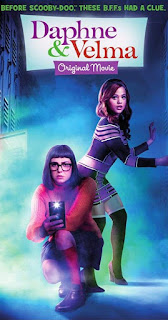 I’m not sure if I should call it a reboot, an update, a prequel, or a spin-off. Whatever you call it, DAPHNE & VELMA is another installment of the Scooby Doo franchise, live action division. And since continuity has never really been a major component of the adventures of Scooby and his mystery solving pals whatever their format, it doesn’t make too much of a difference.


Anyway, as the title implies, DAPHNE & VELMA focuses on the ladies of the Scooby gang. The film begins with teenage Daphne (Sarah Jeffery) posting videos about aliens and the paranormal. Velma  (Sarah Gilman) has a more skeptical viewpoint, and comments on Daphne’s vids that everything has a logical explanation. Despite their different points of view, the two consider each other good friends, even if they’ve never actually met.

That dynamic takes a drastic change, however, when Daphne’s parents move to Velma’s hometown and the two online friends become classmates. Velma wants nothing to do with Daphne IRL. Could it have something to do with the school’s weird social ranking system, installed by its Steve Jobs-like benefactor Tobias Bloom (Brooks Forrester)? And what’s up with members of the student body disappearing into smoke filled lockers, only to return with vastly altered personalities and diminished intelligence? Looks like we’ve got ourselves a mystery.


Unlike the theatrically released live action SCOOBY DOO and SCOOBY DOO 2: MONSTERS UNLEASHED, this makes little effort to appeal to older fans of the original animated series. The target audience here is teens and tweens, and even if they don’t know a Scooby snack from a Dorito, chances are good that younger viewers will tune in for Jeffery, one of the stars of Disney’s popular Descenants series, and Gilman, from Disney’s “I Didn’t Do It” show.


For those younger viewers, this should be a reasonably enjoyable diversion. The plot isn’t much to write home about, but the young cast are game and the whole affair is good natured and likeable enough. In terms of thrills and chills, it’s pretty mild stuff, even by Scooby standards, but there’s enough mystery and adventure that it doesn’t get boring. Definitely not a must-see, but at least it’s more intellectually stimulating for kids than the youtube vids they’d probably be watching otherwise.
Posted by Bob Ignizio at 12:00 AM