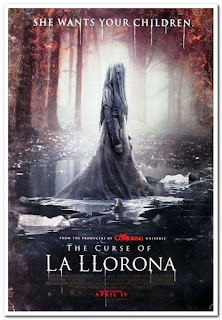 THE CURSE OF LA LLORONA is based on the Mexican folk legend of the crying woman, said to be the spirit of a woman who drowned her two sons and is now condemned to wander the earth looking for her children, murdering other kids along the way. Widowed social worker Anna Tate-Garcia (Linda Cardellini) doesn’t believe her client Patricia (Patricia Velásquez) when she says the reason she has locked her children in their room is to protect them from this vengeful spirit. She thinks they’re being abused, and with the help of police backup frees the kids.


Later that night, Anna gets a call that the children have died, drowned in a river. In shock, but still forcing herself to do her job, Anna heads to the crime scene with her own kids, Chris (Roman Christou) and Samantha (Jaynee-Lynne Kinchen) in tow.

Anna tells the kids to wait in the car, but Chris decides to go off exploring. He winds up bumping into La Llorona, who grabs him by the wrist and leaves a burn on his arm. He escapes and makes it back to the car, but the next day the spirit shows up again, this time at Anna’s home, and attacks Sam. Mom isn’t ready to buy into the supernatural explanation just yet, but when Sam gets attacked again and Anna is herself attacked while trying to save her, it’s time to call in the exorcist. Or in this case, the curandero, an ex-priest named Rafael Olvera (Raymond Cruz).


While every aspect of the production is solid and professional, THE CURSE OF LA LLORONA is very much by the numbers. Although only tangentially part of the “CONJURING universe” of films produced by James Wan (there’s a cameo by Annabelle and Father Perez (Tony Amendola)), CURSE very much follows the formula of those films. There was an opportunity here to do something at least a little different and give an element of pathos to the supernatural threat. Instead CURSE gives us just another generic jump-scaring spook.


In the end, it’s not a bad film; just an uninspired and mediocre one. If a viewer’s expectations are suitably lowered, it should provide thrills and chills, but it’s hard to imagine it leaving any sort of lasting impression.
Posted by Bob Ignizio at 12:00 AM