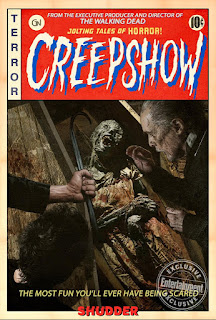 We’re three episodes into Shudder’s reboot of CREEPSHOW, the comic book inspired horror anthology series that originated with Stephen King and Berni Wrightson’s graphic novel and its companion film adaptation by George A. Romero in 1982. With each episode delivering two stories at roughly 45 minutes long, that adds up to a little over 2 hours total so far. So more or less the length of a feature film. Seems like as good a point as any to analyze what we’ve seen so far.

In general, just like the original film, each story aims for a tone similar to fifties horror comics ala EC's "Tales From the Crypt". That means lots of bright primary colors, black humor, and a host in the form of The Creep. Unlike The Crypt Keeper, however, The Creep is essentially mute, only offering the occasional raspy laugh. Now on the the specifics.

The reboot of Creepshow as an ongoing series begins appropriately enough with a Stephen King adaptation. Directed by Greg Nicotero, Gray Matter uses a character’s grisly, gloopy transformation into a killer blob as a metaphor for the way alcoholism destroys both the alcoholic and those around them. There’s considerable star power in this episode, with Adrienne Barbeau, Tobin Bell, and Giancarlo Esposito in starring roles. Not a mindblower, but it fits the CREEPSHOW aesthetic and offers enough thrills and chills to merit a watch.

The second segment is House of the Head, directed by John Harrison from a short story by Josh Malerman (author of ‘Bird Box’). It’s about a haunted/cursed/possessed (take your pick) dollhouse. The episode is creepy, but a bit too cerebral for the old school horror comic book tone one expects. Not bad on its own terms, and off kilter enough that it’s sure to creep some viewers out, but it didn’t really grab me.

This is where I really got on board with Creepshow. Bad Wolf Down is an original screenplay by Rob Schrab, who also directs. Set during World War II, it pits the remnants of an American army unit against a far greater force of Nazi soldiers. Taking refuge in a nearby home, they find what may be both their salvation, and their damnation. This one is pure EC comics bliss, with ample action and gore shot in bold, primary colors. First rate pulpy horror all the way.

Greg Nicotero’s second offering for the series is even better than his first. In The Finger, based on a story by David J. Schow, unlucky schlub Clark (DJ Qualls) finds a severed finger in the street that doesn’t appear to be from anything human. He takes it home and it regenerates, REPTILICUS style, into some sort of tiny monster reminiscent of the Ymir from 20 MILLION MILES TO EARTH. The little beastie likes Clark so much that it goes out and kills the people who have wronged him, whether Clark really wants it to or not. No real deep message here, but it’s a fun, gory, very much Creepshow segment.

What makes better sense for an episode of Creepshow than to adapt a story from an actual horror comic book? Directed by John Harrison, All Hallows Eve was originally a story in an issue of Bruce Jones ‘Twisted Tales’ comic book. In transforming Jones’ pulpy revenge story into something with a bit more pathos, Harrison makes some welcome improvements but also loses some of the primal intensity of the source material. Overall, though, a very solid entry.

Now we come to one of the weirdest segments of the series so far. The Man In The Suitcase is based on a story by Christopher Buehlman and directed by David Bruckner. It’s the sort of surreal morality play that might well have found a home on The Twilight Zone, but with just enough added weirdness and depravity to make Creepshow a better fit. It involves a slacker who finds a suitcase with, you guessed it, a man inside. And whenever the man is hurt, gold coins pop out of his mouth. This results in a moral quandary for our protagonist and his friends: help the guy get out of the suitcase, or keep abusing him to make themselves rich.

In the final analysis, like most anthologies Creepshow is a mixed bag. That said, although I definitely enjoyed some segments more than others, I wouldn’t say any of them were bad. It’s certainly been more consistent in tone and quality than such beloved 80s horror anthologies as Tales From the Darkside and Monsters. Here’s hoping the second half of the season is as good as the first.
Posted by Bob Ignizio at 12:00 AM