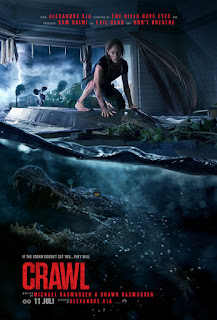 Competitive swimmer Haley (Kaya Scodelario) is returns to her old home with the intent of finding her father (Barry Pepper) and making him leave before a major hurricane hits. Unfortunately, it turns out dad is trapped in the crawlspace under the house with severe injuries inflicted by a mean spirited alligator. Said gator still being there, he also goes after Haley. She manages to avoid becoming dinner, but getting out with her dad won’t be easy, especially with the flood waters rising. Oh, and the gator has friends.

It’s a simple but effective premise, and director Alexandre Aja has the necessary chops to make it tense and compelling.


Ever since his debut feature, 2003’s HAUTE TENSION, Aja has shown himself to be a skilled and stylish director. I liked that film, though not without reservations. Sadly, I’ve been disappointed by what I’ve seen of his subsequent work – a remake of THE HILLS HAVE EYES, MIRRORS, PIRANHA 3D, and HORNS.

There’s always considerable behind the camera talent on display. But the scripts – frequently co-written by Aja himself, but even when penned by others as with PIRANHA and HORNS – always feel half-baked. Aja also has a tendency to revel in extreme violence and gore. Certainly not a deal-breaker for me, but he has such a cruel streak that even an ostensibly fun “B” movie like PIRANHA is off putting for me.

So the fact that Aja has delivered an entirely serviceable nature run amok survival thriller with CRAWL is a pleasant surprise. Although in Hollywood it’s never certain that the credited screenwriters are really, 100% responsible for the script that gets shot, this is different enough from most of Aja’s films that I’m inclined to think brothers Michael and Shawn Rasmussen’s script deserves a lot of the credit for what works. I’m not saying what they’ve written is anything mind blowing, mind you, but it’s solid, and doesn’t throw in too many moments that stretch credulity.

Scodelario is a capable heroine, but we always feel she’s in genuine peril. She also does fine in the secondary plot where she and dad hash out their family issues while trying to survive the gator attack. There’s also a fair bit of time devoted to the tried and true theme of a main character needing to be pushed to their limits to realize their full potential. Again, nothing special, but it’s gives the film enough emotional resonance and the characters enough depth to make the audience invest.

It’s no ANACONDA or THE SHALLOWS. But Aja’s direction in the service of an adequate script, ably supported by strong performances and decent production values adds up to a pleasant enough way to pass 90 minutes.
Posted by Bob Ignizio at 12:00 AM