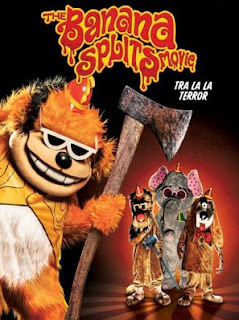 I’m hardly the first person to point out that THE BANANA SPLITS movie bears a strong resemblance to the premise of horror video game/merchandising cash cow/upcoming feature film FIVE NIGHTS AT FREDDY’S. Nonetheless, I’d be remiss if I didn’t mention it, since it’s painfully obvious that the producers were intentionally copying that premise as closely as possible.

And I’m not even bothered by that. That’s been the B-movie production model for decades. Just ask Roger Corman, whose New World Pictures did their best to crank out cheap imitations of big studio hits throughout the seventies and eighties, occasionally even beating their inspirations to the big screen just as this film has.

I’m not bothered that the film takes beloved children’s characters and turns them into horrific killing machines, either. Because let’s be real. How many kids today even know who The Banana Splits are? I don’t think I have to worry about my little guy begging to see this because he just loves Fleegle, Bingo, Drooper and Snork. He has no idea who they are, and I’m guessing very few humans on this planet under the age of 40 do, either.

No, what bothers me is how bad THE BANANA SPLITS is.

The basic premise is fine, and has potential: a group of Banana Splits fans come to a taping of the show and stay behind afterwards, hoping to meet the Splits who in this film are robots rather than people in costumes. Doesn’t make a lot of sense from a production standpoint but makes a lot of sense if you’re doing a FIVE NIGHTS AT FREDDY’S knock-off. When the Splits find out that their show has been cancelled, their already shaky programming really goes haywire and they go on a gory killing spree.

Unfortunately, director Danishka Esterhazy seems to have no affinity for either horror or comedy, which is kind of a problem if you’re making a horror-comedy. His sense of timing is non-existent, and the sadistic cruelty of the killings undermines any potential laughs. At the same time, there’s no real sense of suspense or menace. Gorehounds might be happy with the amount of red meat the film dishes up, but there’s not much beyond that.

The various characters and subplots in the screenplay by Jed Elinoff and  Scott Thomas are little more than a collection of played out cliches. I'm not saying you need a great script for a movie like this, but having one this bad is a detriment.

For comparison, look at KILLER KLOWNS FROM OUTER SPACE, another film that takes kid friendly icons who always had a creepy undercurrent and turns them into monsters. The plot wasn’t much deeper, but the jokes were genuinely clever, and despite their comical appearance, the Klowns were believably dangerous. That movie also felt like it was coming from a place of genuine passion on the part of its makers, the Chiodo brothers, while THE BANANA SPLITS is obviously work for hire. And KILLER KLOWNS did it all on a shoestring budget that, adjusted for inflation, probably isn’t much different than the amount BANANA SPLITS cost to make.

I’m sure this will still pass muster with some, and I’m not here to shame anyone for liking it. But if you’re looking for anything more than a reasonably slick and gory time waster, I’d suggest you give this one a pass.