[Once again I'm going to attempt to do a horror(ish) movie review a day for the entire month of October. I've done this the last few years on The Cleveland Movie Blog. Most of the time I succeeded. Other times I didn't. We'll see if I can pull it off this year.] 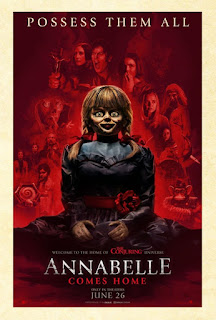 Although Annabelle get’s top billing, ANNABELLE COMES HOME is more of a monster rally in the HOUSE OF FRANKENSTEIN or DESTROY ALL MONSTERS mold than a star vehicle for the demonic doll. Still, the title isn’t entirely misleading as the film begins with Ed and Lorraine Warren (Patrick Wilson and Vera Farmiga) takin the titular menace away from the clueless college kids who she was last terrorizing, and tossing her in the backseat for a late night ride to their home. Once there, the terrifying toy is placed in a special locked and blessed display case in the Warren’s museum of the macabre from which she can never escape.

Anyway, after this prologue, which is arguably the best part of the movie, the Warrens go out of town and leave their daughter Judy (Mckenna Grace) with trusted babysitter Mary Ellen (Madeline Iseman). Mary Ellen’s friend Daniella (Katie Sarife) also comes over, and as you might guess, the girls eventually let loose Annabelle and various other evil spirits from the Warren’s trophy room.


It sounds like it should be fun, but the movie is so padded and slow moving that it never lives up to the potential of its premise. To be honest, it’s kind of boring. It’s also a more teen and tween friendly installment of the series, at times feeling more like an installment of the GOOSEBUMPS series than part of the CONJURING universe. It’s well acted and the production values are up to snuff, but as with this years other installment in this franchise, THE CURSE OF LA LLORONA, it never rises above mediocrity.


I’d say it might be worth a watch for younger viewers who want something with a little bit of an edge (but not too much), but my guess is they’ll be even less tolerant of the pacing than an old fogie like me.
Posted by Bob Ignizio at 12:00 AM