This interview originally appeared on the old Utter Trash website in November of 2005. Obviously some things have changed since then, notably the recent passing of The Ghoul aka Ron Sweed on April 1st of 2019. Nonetheless I believe this interview is still of interest, and is presented as it originally ran with only a few minor editing tweeks. 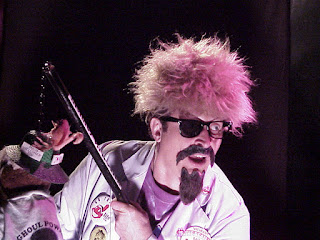 Ron Sweed broke into show business as a teenager, working as an assistant to legendary Cleveland horror host Ghoulardi (aka Ernie Anderson) in the mid sixties. He continued to work behind the scenes for Anderson’s replacements, Hoolihan and Big Chuck, before donning the fright wig and lab coat that had been Anderson’s trademark in 1971. As The Ghoul, Sweed kept Ghoulardi’s legend alive not just in Cleveland, but in Detroit and (briefly) Chicago, as well. His last television stint was on Cleveland's Channel 55 WBNX from 1998 until 2004.


Utter Trash: So how did your run on channel 55 come to an end?
The Ghoul: It was probably a mutual disdain for one another. They were glad to see me go, and I was glad to go. We should be on a new station soon.

UT: Channel 55 had strong religious affiliations, being owned by Ernest Angley. Any issues over content while you were on?
G: Content wasn’t a problem at all, just minor things that kept stockpiling. Just towards the last six months they started, for the first time in the 6 years we’d been going, to dictate content. We’ve done appearances at Ghoulardi’s and other clubs around town for the past 6 years, and now all of a sudden they were telling me they can’t show any more footage of me in bars, or whatever.

UT: What are some of the horror movies that you personally like?
G: I’ve been watching them all my life. The first one I saw was ‘Frankenstein’, and that’s been my favorite all my life. You can’t beat the Frankenstein monster. I like all the Universal classics, those are great. The newer ones, back to the seventies, ‘The Exorcist’ I don’t think you can get better than that. ‘Jaws’, that ruined my honeymoon. I went to the Caribbean and didn’t go in the ocean after I saw ‘Jaws’ just before. It’s not a horror movie, but one of the best movies I’ve seen in a long time was ‘Pirates of the Caribbean’. I love Disney world, and that’s one of my favorite attractions.

UT: You broke into show business in an unusual way.
G: I was 13 years old. 2 weeks before I maneuvered my way into meeting Ghoulardi I stole a gorilla suit. There was a guy called Dr. Silkini and his live stage show of horrors at a Euclid movie theatre. Frankenstein, Dracula, and King Kong on stage in person! While Dr. Silkini was packing up his gear, we were walking through the back alley. It was his misfortune to leave the gorilla suit unattended. I grabbed it. Ernie Anderson was appearing at an amusement park called Euclid Beach in Cleveland. I figured if I wore the suit, I’d at least get an autograph out of the deal. I got an autograph, I got to meet him, and he let me come down to his show the next day. And I just became his gopher. I’d get his mail, and get his props set up.

UT: After Ernie left and Hoolihan and Big Chuck took over the movie hosting duties, did you continue on with them?
G: Ernie left in 1966 and established himself as the voice of ABC. I was still in high school, so I started the show with Big Chuck and Hoolihan as a production assistant. I graduated from high school and went to Bowling Green University, but was still coming home on the weekends to do the Big Chuck show. I tried to get Ernie Anderson in 1971 to come back once a month and do Ghoulardi. I’d just continue to do what I used to do, but he didn’t want to hear about it. I asked him if I could re-create the role and he gave me permission. He said, “I own the character. I don’t care. But Storer broadcasting owns the name, so knock off the “ardi”, call yourself The Ghoul.” So I took it to Kaiser and it worked immediately. I’ve been doing it since 1971. There’s been a lot of imitations and spin-offs since then.

UT: Like your illegitimate “son” down in Canton?
G: People just come and steal the material without asking. We did take him to court, but it was like going to Mayberry. The judge would not rule in my favor. Forget copyrights and stuff like that, her ruling was that imitation is the sincerest form of flattery. My attorney said we could pursue it, but it would cost a lot of money. So that was that.

UT: Now what about some of the other “feuds” you’ve had, like with Denise Dufalla or Big Chuck? Are those just made up, like when Ghoulardi used to pick on Dorothy Fuldheim?
G: Chuck has been like an older brother, best friend of mine since I started working with him. If you don’t hear me mention them on the show, you know I really have disdain for them. If I mention them on the show, I think they’re cool. Denise has one of the best senses of humor around. Right from the start she knew what I was going to do, and we collaborated on different stunts and everything. I love Denise.

UT: Did you ever play her CD when you were DJing?
G: You don’t want to take it too far. I don’t love Denise that much! Although she does do one track on the CD with Michael Stanley.

UT: Speaking of the DJing thing, you’ve done your fair share of that. Why can’t someone like you get a radio show and play whatever you want?
G: I was on WNCX doing the Saturday night house party. I left the station to do a great show which was exactly what you’re talking about. It was an online show called Cleveland Hits.com. We were going around the world with it. We didn’t have to adhere to a playlist. You can’t do that on commercial radio anymore because they have consultants. The consultants dictate to the program director and the manager. You couldn’t work for better people than I did at NCX. Bill Lewis was my program director, and Walt Tibursky was my GM. He was the only general manager that ever let me shoot off actual fireworks in a radio station. But you have a playlist from corporate. To make it brief, John Lennon in his solo catalog has like 135 different songs. We can only play the song “Imagine”. If anybody calls in and asks for a John Lennon song, that’s what we play. Clear Channel owns stations from coast to coast. So if you’re driving coast to coast, guess what song you’re going to hear from John Lennon? Cleveland Hits went down the tubes because the record companies lobbied Washington for legislation that made it too expensive for online radio stations to exist anymore.

UT: You at least get to bring some of your musical tastes into the TV show.
G: We’ll still do that. Mix the old with the new. There’s a lot of good new stuff out there. But it’s getting harder and harder to maintain a TV show, also.

UT: Do you think things are getting harder for local TV?
G: Actually, the pendulum does seem to be swinging back the other way. A couple of years ago the only locally produced shows you were seeing were the news. But with Channel 3 for example, Fred Griffith has a regular show every day now. As far as horror hosts, what’s going to save them is cable, and things like The Horror Channel. I’m sure it will be tinkered with corporately. It’s going to change. It’s pretty hard to hang on to the way things used to be, and in most cases you don’t want things to be the way they used to be. We have flush toilets now. Without change we’d be running around and taking a dump in the back alley.

UT: Some people get you and Ghoulardi mixed together. How does that make you feel?
G: When I first started in 1971, it was annoying. It just gets to the point where you realize you can’t correct them, and so what? It doesn’t matter. People will come up to me and say they remember Ghoulardi doing Froggy. Ghoulardi didn’t do Froggy, I did. Or someone will mention a piece of music from Ghoulardi, and it couldn’t have been on Ghoulardi because the song came out in the seventies. It doesn’t matter. I still watch my stuff as an impartial audience member, and 9 times out of 10 I say to myself, “Ernie Anderson was a hell of a lot funnier, he would have done that a lot better.” So if they confuse me with Ernie Anderson that’s pretty cool. There isn’t anybody else I’d rather be confused with except maybe John Lennon. I was lucky enough to work with Ernie Anderson, and I was lucky enough to meet John Lennon three years in a row, and they were like kindred spirits. They had the same sense of humor, the same outlook on life, the same zest for living. I had a great childhood. A lot of great memories.

UT: Any parting words for the legions of ghoul fans out there?
G: Just remember, do it while you can, but don’t get caught!