[The 2019 Oscar Nominated Shorts - Animation opens in Cleveland on Friday February 8th at the Capitol Theatre, The Cedar Lee Theater, The Apollo Theater, and Chagrin Cinemas.] 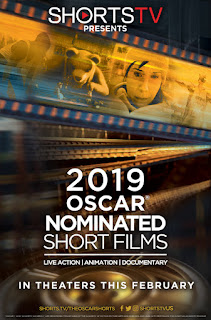 Back when I was doing the Cleveland Movie Blog, I tried to review all three programs. And believe me, they’re all well worth seeing. This year, however, I’m only going to be reviewing the Animated Shorts program. Partly because it’s the best fit with what I’m doing now, and partly (mostly) because I just haven’t had the time to watch all three programs in their entirety, let alone review them.

Okay, on to the reviews.


Bao
The first nominee is the one most likely to have been seen by a wide audience, Pixar’s ‘Bao’. Pixar has won this category several times in the past, but I’m hoping they don’t win this year. It’s about a woman who adopts an anthropomorphic dumpling and raises it as her own child. However, when the dumpling reaches maturity, she takes drastic measures to insure it won’t leave home. It’s an odd and off-putting allegory that just doesn’t work for me. It’s Pixar, so of course the animation is well done. But now nearly every major studio has a computer animation house churning out features in the same style. Pixar may arguably still do better animation than their competitors, but that’s not enough on its own to make a so-so short like ‘Bao’ stand out.

Late Afternoon
Having lost my dad to Alzheimer’s disease not that long ago, it’s probably no surprise that ‘Late Afternoon’, which tries to depict the mental processes of a woman suffering with the disease, resonated with me. Director Louise Bagnall does a fine job depicting the way thoughts can shift between past and present, fragments coming into focus only to dissipate before they can be fully grasped. The art is hand drawn and at times a bit primitive, but the way the animation flows really helps get across what the movie is trying to say about the disease. If I were a voting member of the Academy, this would be my pick.

Animal Behavior
This short about a group of animals in a therapist’s office (the therapist is, himself, a dog) could easily be a scene out of an Adult Swim show. The art and animation are solid if not exactly mind-blowing, but that’s fine. The focus here is on getting laughs, and on that front Animal Behavior succeeds. My 2nd grader said this was his favorite. There were a few jokes involving sexual innuendo, but they’d almost certainly go over the heads of anyone they’d be inappropriate for.

Weekends
A child of divorce spends the weekends at his dad’s swanky apartment. Sometimes he dreams, and the dreams usually involve a horse. It’s sort of a melancholy tone poem, I guess. Not bad, just didn’t really grab me.

One Small Step
An uplifting little film about a young girl who dreams of being an astronaut. Her father, a shoemaker, encourages and supports her, notably making her a pair of astronaut boots. Various obstacles and setbacks appear, but the love of her father might just see her through. It’s hard not to like this one, even in its saddest moments. The animation style is more mainstream, appearing to be a mix of hand drawn and computer techniques. It actually feels more like a Pixar short than this year’s entry from Pixar.

There are two other shorts included in the program – Wishing Box and Tweet Tweet. Neither of these were nominated for the Oscar, nor were they included in my review materials. I can’t say much about them other than they are animated, and they are short. Nonetheless, the five films I did see add up to a solidly entertaining program on their own. Whether or not it qualifies as something you’d want to take the whole family to is hard to say. Kinda depends on the attention span and maturity level of your youngsters, and whether or not things like Alzheimer’s and divorce might be troubling subjects for them. For teen and adult animation fans, however, I can unequivocally recommend it. Especially since, aside from Bao, there’s no guarantee you’ll be able to see any of these other films easily.