[HEAVY TRIP is currently available for rent or purchase on DVD, Blu Ray, and digital formats. Note - dialogue is in Finnish, Norwegian, and some English with subtitles, so if that's an issue for you consider yourself warned.] 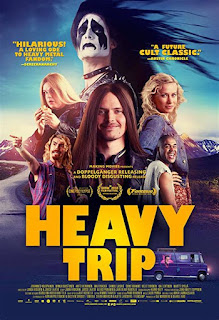 Despite their brutal music and intimidating appearance, the twenty-something metalheads who will eventually adopt the collective moniker Impaled Rektum are an affable, and to a large degree, nerdy, bunch. They’ve been playing together for 12 years as HEAVY TRIP opens, and after a particularly good practice the band’s devil-may-care drummer Jynkky (Antti Heikkinen) suggests they finally take the plunge and book a show.


But the band’s most serious member, bass player Pasi (Max Ovaska), quickly puts the kibosh on that idea. He says they can’t play out until they write some songs of their own. Lead vocalist Turo (Johannes Holopainen) is more than happy to back Pasi up, but the real reason he doesn’t want to go on stage has more to do with his shyness than a lack of original material. And since guitar player Lotvonen (Samuli Jaskio) can’t come up with any riffs that haven’t already been used by other bands, it would seem the group won’t be leaving their basement rehearsal space anytime soon.

And so, the band members labor on at their menail day jobs while enduring derision from the local yokels. The film is told from Turo's point of view, so we follow him as he works at a mental hospital/nursing home. It’s at Turo’s work where we are introduced to Oulla (Chike Ohanwe), a violent patient who finds peace by listening to extreme metal. You can tell as soon as he’s introduced that he’ll have a larger part to play in the story. We also learn that Turo secretly pines for Miia (Minka Kuustonen), the town’s florist. But of course, she’s already dating a jerk – douchey lounge singer Jounni (Ville Tiihonen). And also of course, Miia’s police chief dad has it in Turo and his friends.


Eventually the band do manage to write a song thanks to some unusual inspiration. Since this is a movie, that one song is all they need to set off in search of fame, fortune, and a spot on a Norwegian metal festival. But musical inspiration turns out to be just one of the obstacle in the band’s path.


In terms of plot, the film is built on the same foundation as so many “lovable losers make good” comedies. One could give away the entire plot and not be guilty of giving up spoilers, because there’s nothing in terms of plot that anyone who has seen more than a few movies won’t see coming. But honestly, that doesn't hurt one's enjoyment of the film by much.


That's because the characters are likeable, the jokes are funny, and the milieu of the European extreme metal scene brings freshness to the formula. There are some jokes that will only register with those familiar with bands like Emperor and Children of Bodom, and that’s as it should be. But co-directors/co-writers Juuso Laatio and Jukka Vidgren (and additional writers Aleksi Puranen and Jari Olavi Rantala) make sure most of the jokes will land even if you’re a Justin Bieber fan.


The predictability does knock a few points off for me if I’m wearing my critic’s hat. But as a viewer just looking for entertainment, it’s hard to have too many complaints about HEAVY TRIP. And as a metalhead, I appreciate that the film is able to laugh at the absurdities of the genre while still treating it with respect. All in all, a welcome addition to the pantheon of heavy metal comedies alongside THIS IS SPINAL TAP, BILL & TED’S EXCELLENT ADVENTURE, and DEATHGASM.
Posted by Bob Ignizio at 12:00 AM