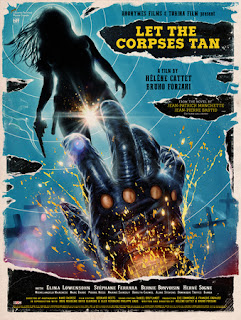 You can’t say that LET THE CORPSES TAN doesn’t have a plot. It’s just that co-directors Hélène Cattet and Bruno Forzaniand seem less concerned with the straight-forward crime story their film hangs on than in conjuring up striking imagery informed by fetishized B-movie tropes and art house pretensions. They don’t care about the assortment of crooks, cops, and artistic outcasts who inhabit their sunbaked neo-noir spaghetti western, and neither do we. So all that’s left is to sit back and look at the pretty pictures.

To be honest, that’s good enough at times. There are some shots here worthy of Jodorowsky, such as one scene in which a woman is bound tightly with ropes by a group of men until champagne starts spouting from her breast, a scene which exists apart from the storyline and serves purely as symbolism. Most of the film, however, is an all-day shootout between the various parties. Plenty of compelling visuals in that aspect, as well, but not enough to alleviate the tedium.

There’s no doubt that Cattet and Forzaniand have an artistic vision, not to mention the talent to put that vision on screen. But the only real emotion in their film comes from the music, culled from various films of the 60s, 70s, and 80s. Most notably, “Sunny Road to Salina” composed by Christophe for the movie of the same name, gives several scenes a more majestic feel than they probably deserve. But 90 minutes of visually stunning shots and recycled film scores doesn’t add up to much in the end.

The intersection of the grindhouse and the arthouse is a neighborhood I generally like to visit. One of my favorite films of recent years was Leos Carax’ HOLY MOTORS, a film that blended surrealism with a love of classic genre tropes in an even less conventional manner. And maybe that points to part of the problem with LET THE CORPSES TAN – because it is, in some ways, a conventional crime film. As such, one has expectations that it will be more satisfying on that more conventional level. When those expectations are largely unmet and flat out disregarded by the filmmakers, it’s hard not to feel disappointment.

LET THE CORPSES TAN is currently out on French DVD and BluRay if you have a region free player. It’s also getting a limited theatrical release in the U.S. Here in Cleveland you can catch it at the Cleveland Cinematheque on Sunday November 25th 2018 at 6:30 pm or Monday November 26th 2018 at 8:45 pm. My issues with the film aside, I have to say some of its more striking imagery would really look good on a big screen, so if you were going to check it out anyway, that’s the way to go.