Lucifer Risible: The Satanic Panic in the Eighties

[This article was originally posted on Myspace back in 2007. It’s one of a few things I wrote back then that I still kind of like, and since it’s not there anymore, I figured I’d post it here in time for Halloween. I wish I could say people were less prone to believing in crazy conspiracy theories these days, but as anyone who follows the news can easily discern, that’s obviously not the case.] 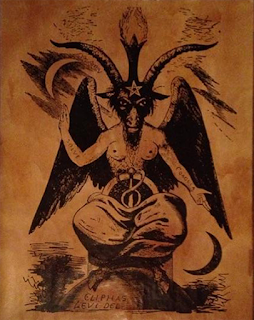 A lot of ridiculous things went on in the eighties, but one of the most ridiculous was the “Satanic Panic” hysteria that gripped the nation for much of the decade.  Without any evidence whatsoever, a surprisingly large number of people came to believe that there was an underground conspiracy of Satanists operating all throughout the world.  To all appearances, these devil worshipers were ordinary average citizens.  They had infiltrated all aspects of society.  One of them might even be your next-door neighbor.

The primary activity of this vast and powerful network of evil was sexually abusing and murdering people, usually children.    When they weren’t raping and murdering, they were making rock music.  Depending on whom you asked, the degree to which the Devil had infiltrated the music industry ranged from just the usual suspects (i.e. Ozzy and Judas Priest) to every rock musician in existence, including Christian rockers like Stryper and Amy Grant.  And if the rock music didn’t hook ‘em, the cultists could always lead kids down the path to darkness with role playing games like Dungeons and Dragons.

Strangely, a lot of the anti rock crusaders seemed more concerned with what songs sounded like when you played them backwards than forwards.  Here’s the all time backwards masking #1 hit, Led Zeppelin’s “Stairway to Heaven”.

Even with the secret message helpfully written out for me, it still sounds like gibberish to my ears.  And what exactly is, “There was a little tool shed where he made us suffer, sad Satan” supposed to mean, anyway?

Now on the surface, all this seems like pretty harmless nonsense.  I mean, so what if a few people deluded themselves into believing that Lucifer’s minions were hiding in the bushes waiting to spring on the unwary with an AC/DC album and some twenty-sided dice?  It certainly didn’t hurt the album sales of the bands, and Dungeons & Dragons was never more popular than it was in the eighties.  The problem is, before long some people who should have known better began to take this crap seriously.  And that in turn led to a whole lot of misery for some people.

The most famous example is probably the McMartin Preschool case.  In 1983, 9 schools and 1 church in the Manhattan Beach area were accused of Satanism, animal mutilation, and running a child pornography ring.  The person who made these charges was an alcoholic paranoid schizophrenic with a past history of filing false police reports.  Nothing against alcoholic paranoid schizophrenics.  I’m just saying that, in lieu of any corroborating evidence, and given the past history, one might want to take accusations made by such a person with a grain of salt.  To go into detail about the case would take too much space (and frankly isn’t a lot of fun), so allow me to direct you to the excellent book The Abuse of Innocence: The McMartin Preschool Trial by Paul and Shirley Eberle.  Or for the condensed version, just check out Wikipedia.

Stuff like the McMartin trial further fueled the fevered frenzy of fundamentalist fanaticism (nice alliteration, huh?), and a veritable cottage industry sprung up of “experts” on the occult. These people would make completely baseless claims like saying 40 to 60 thousand people were murdered in Satanic rituals in the U.S. annually.  Never mind the fact that there isn’t even close to that many murders of any kind reported in this country in a given year.  I remember one church in my hometown used to have one of these “experts” come in and speak every few months, mainly with an anti-rock music slant.  My friends and I always talked about going to check it out, but for some reason we never did.

Anyway, it wasn’t long before every piece of roadkill or upside-down pentagram spray painted under a bridge by some bored, glue sniffing Ozzy Osbourne fan was seen as proof that suburbia was being overrun by Beelzebub.  And it wasn’t just the people on the fringe who believed it.  Stories of Satanic cults were in the news enough that most people assumed there must be something to it, even if they themselves weren’t especially religious.  After all, you don’t have to believe in the Devil to be concerned if people who do are committing heinous criminal acts in his name.

It all reached its peak on October 25th, 1988 when Geraldo Rivera’s Devil Worship:  Exploring Satan’s Underground aired on prime-time TV.  For two amazing hours, Geraldo managed to keep a straight face as he put forth the most absurd comic book version of Satanism imaginable.  It was a veritable buffet of sex, violence, and the occult, complete with blood drinking, cannibalism, the forced breeding of babies for use in Satanic rituals, sex orgies, and necrophilia.  The cherry on top of this sundae was an interview with Charles Manson.  Forget about It’s the Great Pumpkin Charlie Brown; they need to start showing this thing every year at Halloween.

Now seriously, the real-life horrors Rivera is covering are no laughing matter.  But you just have to love it when he tosses off lines like “his business card came straight from Hell.”  This is tabloid journalism at its best/worst, without any pretense to fact checking.

Sure, you have the occasional troubled teenager who dabbles in Satanism, but the irony is that the kind of Satanism they’re acting out is the cartoon version put forth by the anti-Satanic crusaders.  On rare occasions self professed Satanists like Richard Ramirez do commit murder, but guys like Ramirez are the exception rather than the rule.  Far more common are cases where Satanic Panic results in innocent people having their lives ruined, as appears to be the case with the McMartin case I wrote about earlier, and more recently with The West Memphis Three.

As for the few thousand people who actually belong to organized Satanic religions like The Church of Satan and The Temple of Set, there is absolutely no evidence that they are more likely to commit a serious crime than anyone else.  “Official” Satanists don’t even believe in the Devil (or God, for that matter).  To be honest, they’re kind of boring.  Certainly nowhere near as exciting as their counterparts in movies and pulp novels.  So in the end I guess it is possible that Satanists are living next door to you.  But if they come knocking on your door, don't worry that they want to kill your baby; they probably just want to borrow your lawnmower.
Posted by Bob Ignizio at 12:00 AM