31 Days of Halloween 2018: These 'Ghost Stories' Can Even Scare A Skeptic 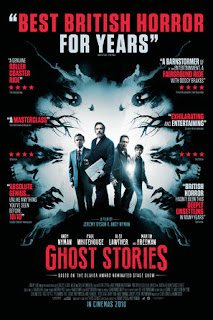 Despite being an avid, long time horror fan, the truth is very few horror movies scare me. Like anyone, a good jump scare can startle me, and some of the more boundary-pushing films out there most definitely disturb and/or disgust me. But in terms of shivers-down-the-spine terror, not much gets to me.


GHOST STORIES got to me. More than once.


Written and directed by Andy Nyman and Jeremy Dawson, GHOST STORIES is a British horror anthology film. It’s in the tradition of similar films that were in their prime in the 1970’s when Amicus studios released such titles as THE HOUSE THAT DRIPPED BLOOD and DR. TERROR’S HOUSE OF HORROR. But with its subtler brand of ghostly thrills and chills, it owes more of a debt to 1941’s DEAD OF NIGHT.

The obligatory framing sequence centers on paranormal debunker Phillip Goodman (co-writer/director Nyman). We first see Goodman at work exposing a John Edwards type spiritualist (modeled after a real case in which skeptic James Randi exposed faith healer Peter Popoff). We also learn that Goodman embarked on this particular career in part because he felt his father’s strict Jewish faith, which he regards as superstition no different from belief in ghosts or psychics, was responsible for breaking up his family.


The story proper begins with Goodman being contacted by a once famous seventies debunker named Charles Cameron (Leonard Byrne), one of his heroes. Cameron tells Goodman that both of their work has been a waste, and to prove it assigns him three cases he claims are impossible to explain. Determined to prove Cameron wrong, Goodman sets out to do his own investigations.


Anthology films can often be uneven, but all the tales presented in GHOST STORIES are equally strong. Each is a symphony of shadows and the supernatural, and taken at face value, leave little room for prosaic explanations. Nonetheless, Goodman tries to assure himself that the motto he learned from Cameron, “The brain sees what it wants to see”, is explanation enough. But of course, in keeping with the formula for horror anthologies like this, there’s a twist. One that makes the terror Goodman has dismissed all too personal.


This is an expertly crafted film. Although adapted from their stage play, Nyman and Dyson’s direction never feels stagey. They have a sure command of the camera, and are adept at hiding important and frightening details in the background or in the corner of the frame. They’ve also assembled a first-rate cast, including Martin Freeman (THE HOBBIT, ‘Sherlock’), Alex Lawther (‘End of the F***ing World’, GOODBYE CHRISTOPHER ROBIN), and a number of other fine British thespians.


I don’t have a lot of negative things to say about this movie. The framing sequence is perhaps a bit clunky, and as a nonbeliever in all things paranormal myself, it’s kind of annoying that skeptics are always portrayed as wrongheaded pompous asses in movies like this. Especially when we see in the early scene where Goodman exposes the psychic fraud just why skeptics are valuable. But whatever, it works in the context of the film, and the way things play out it’s entirely possible the main character was right in his outlook, even if he was a dick about it.


Regardless, the individual stories that make up the film (and eventually prove to be more interconnected than we first realize) are all stellar and genuinely scary. And if the film can work that well for someone like me who doesn’t believe in ghosts or the supernatural at all, I can only imagine how effective it would be for a believer. You may want to leave the lights on for this one.
Posted by Bob Ignizio at 12:00 AM