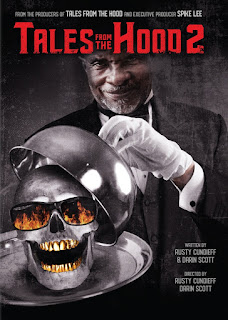 I’m pretty sure I’ve mentioned this in a review before, but it bears repeating. Everyone seems to understand that science fiction explores themes that deal with real life, often controversial social and political issues like racism, religion, and power-hungry leaders. But horror is all too often assumed to be devoid of such insights even though it can be just as political.

Case in point: Rusty Cundief and Darin Scott’s TALES FROM THE HOOD 2. As the title implies, the structure and tone come from the old E.C. comic books (and the TV show they inspired), ‘Tales From the Crypt’. That is to say, there’s a “host” who introduces a series of creepy stories that are generally as campy as they are gruesome, and almost always end with a twist.

In the case of TALES FROM THE HOOD 2, though, there’s an extra element to be found. Each of the horror stories contained in this anthology deal with highly charged racial issues. That the filmmakers are able to mix serious (and often uncomfortable) socio-political commentary with B movie entertainment and not sacrifice either is no small feat.

Our host for this terrifying trifecta of tales is Portifoy Simms (Keith David, JOHN CARPENTER’S THE THING, replacing Clarence Williams III from the first film). Portifoy has been hired by Dumas Beach (Bill Martin Williams), a sleazy businessman who made his fortune in the private prison industry. Now he’s looking to make even more money with his latest invention, a crime fighting robot he calls the RoboPatriot. But first, he needs to program it to recognize criminals. Beach figures Simms can share some crime related stories with his bot to this end. Yeah, it’s a pretty silly set-up, but its in keeping with the film's comic book inspiration.

Simms then relates four stories, all of which do indeed feature criminals getting their come-uppance, but not quite in the way Beach expected. Nonetheless, he figures his crime fighting robot is good enough to present to the public. It should be no surprise to viewers that the robot’s big debut has a few glitches.

Speaking of glitches, there are a few in this movie. Nothing too serious, but noticeable nonetheless. Perhaps the most obvious one comes in a segment about date rape that feels especially relevant at this moment in history, right down to a line about boys being boys. Hard to get into specifics without giving away the twist, but let’s just say the way cameras work in this story are inconsistent.

The film’s low budget also hurts at times, particularly when it comes to showing RoboPatriot in action. But this is, after all, a B movie inspired by comic books, so does it really have to be that convincing?

Shortcomings aside, far more here works than doesn’t. The entire cast is good, but Keith David in particular seems to relish playing his version of the Crypt Keeper. And the campy, comic book tone not only works well to leaven some stories with humor, but also to give Mr. Simm’s final tale, the film’s most sober, more of an impact by contrast. Including real life civil rights figures, notably Emmett Till, in one of this final tale was a risky move, but it pays off. Here’s hoping Mr. Simms has a few more tales to share next Halloween, as there seems to be more people than ever who could stand to learn a thing or two from them.
Posted by Bob Ignizio at 12:00 AM