31 Days of Halloween 2018: Spirits Aren't The Only Thing That's 'Malevolent' In This Netflix Fright Flick 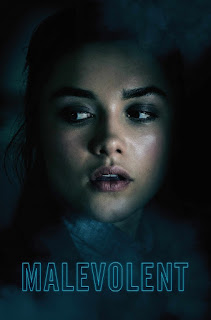 Brother and sister ghostbusters Angela (Florence Pugh) and Jackson (Ben Lloyd-Hughes) pretend to talk restless spirits into moving on for their clients, but it’s all a put on. That changes when Angela starts to get strange nose bleeds, and sees what might be an actual ghost. She’s troubled, because her mother, the original fake psychic in this con, had the same symptoms and claimed to see real spirits, too. Shortly before she went crazy and clawed her own eyes out.


So yeah, Angela is none too thrilled to be seeing things, and would just as soon get out of the spook game. Jackson, however, owes money to some bad people and insists they take one last gig to get him out of debt. And so Angela reluctantly agrees. With Jackson’s girlfriend Beth (Georgina Bevan) and their trusty assistant Elliot (Scott Chambers) in tow, the siblings head off for what they expect will be just another run of the mill con job.

Their latest customer/mark is Mrs. Green (Celia Imrie), an old woman who still lives in the orphanage she used to run. Years ago, some of the orphan girls were murdered, their mouths sewn shut beforehand. Now, apparently, their spirits refuse to stay quiet, and Mrs. Green is hoping Jackson and Angela can make them go away. But there are a few important details that have been left out, which our team of intrepid paranormal hoaxers will learn the hard way.


Despite a setup that seems to promise more of a “quiet” horror film, the third act takes a sharp turn into SAW territory. It’s not unwarranted given the story, but it may be a bit jarring for some viewers. Also, despite a tone that seems fairly grounded despite the supernatural elements, there’s one character whose ability to take a licking and keep on ticking pushes credulity.


Stil, overall… not bad. The production is polished, the direction by Olaf de Fleur Johannesson is capable, the acting solid, and the script by Ben Ketai and Eva Konstantopoulos is holds one’s attention for the most part despite its predictability. Nothing really stands out, but it’s a passable time killer if you’re looking for something new and scary to watch on Netflix. And that’s about as much emotion as I can muster for this thing one way or another.