31 Days of Halloween 2018: Sorority Babes in the Slimeball Bowl-O-Rama 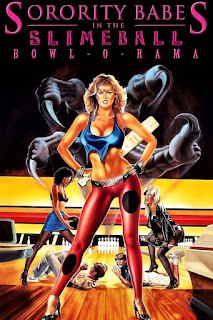 Despite being an avid consumer of straight to video B movie dreck in the eighties, somehow I never saw SORORITY BABES IN THE SLIMEBALL BOWL-O-RAMA. Sometimes even for a movie maniac such as myself, a classic will slip through the cracks. For example, I didn’t see SCARFACE until the 2000s, if you can believe that. Anyway, I noticed a few friends of mine had been watching this one recently (it’s on Shudder as part of Joe Bob Briggs’ “The Last Drive-In”), and that proved to be the push I needed to finally check it out.


The plot is that sorority pledges Taffy (Brinke Stevens) and Lisa (Michelle Bauer) have to break into a bowling alley and steal the trophy as part of their initiation. This after sorority sister Babs (Robin Rochelle) has already given them a gratuitous spanking while the only other two sorority sisters – Frankie (Carla Baron) and Rhonda (Kathi O'Brecht) watch. Also watching are a trio of nerdy dudes – Calvin (Andras Jones), Keith (John Stewart Wildman), and Jimmie (Hal Havins).

The nerdy dudes get caught peeping, and are forced to accompany the pledges into the bowling alley while Babs and her sisters oversee from the security booth. As it turns out, there’s someone else already trying to rob the bowling alley, 80s movie punk rocker Spider (Linnea Quigley). While Spider is looking for loot, she also helps the gang retrieve their prize. At some point, the trophy gets knocked over, releasing a jive talking imp (voice of Dukey Flyswatter).


The imp offers everyone a wish for setting him free. Spider and Calvin are smart enough to know these sort of things always backfire and take a pass. Jimmie wishes for gold, Taffy wishes to be prom queen, and Keith wishes to have sex with Lisa. Poor Lisa doesn’t even get a wish to have backfire on her. Meanwhile Frankie and Rhonda get possessed or something, while Babs manages to escape the control room unscathed for the moment.


There’s also a maintenance man (character actor Buck Flowers, notable for several John Carpenter films) who spends most of the movie trapped in a closet and escapes only to provide backstory and exposition to the remaining un-demonized characters.


Released in 1988 by Full Moon Features, the production values are exactly what you’d expect for a film with a budget of less than $100,000. A good portion of that literally goes up in flames in the film’s one and only fire gag, which is pretty much it as far as special effects go. The demon make-up on the sorority sisters comes down to a mud facial for Rhonda, Bride of Frankenstein hair for Frankie, and a really bad wig and black metal chick wear for Babs.


Gore is almost non-existent. None of the kills happen on screen, and a character who has supposedly been torn in half has her post-mortem depicted by placing the top half of the actress behind one end of a wide post, and stunt legs placed at the other end. We do at least get one severed head used as a bowling ball, but for all I know the prop was left over from another film.


SORORITY BABES does deliver on the nudity, though. Scream queens Bauer and Stevens both spend a decent amount of screen time in the buff. Not to give the movie too much credit, but Quigley keeps her clothes on (she certainly wasn’t averse to taking them off in other films) which is wholly appropriate given that her character is here to be the capable heroine, and not anyone’s sex object. Also of note, the film manages to take the problematic sex wish and somehow make it not so rapey. Once Lisa starts writhing on Keith’s lap, he actually recognizes that she isn’t in control of herself and tells her to stop because she will regret it when she comes back to her senses. For the eighties, that’s a pretty unusual example of showing that consent matters.


Now for the imp. Remember, folks, this was the eighties. It was not an enlightened decade. So having a white guy talk jive for a rubber demon puppet was pretty much par for the course. I’m not saying it’s right, but if you’re going to spend any amount of time diving in the dumpster of eighties pop culture, you’re going to find a lot of this kind of thing.


Working from the often-incomprehensible cocktail napkin script by Sergei Hasenecz, director David DeCoteau does his usual competent job of direction. He knows he’s not making CITIZEN KANE, but he still does his best to turn in as professional a product as he can given the limitations.


On the plus side, like most B movies this one knows not to overstay its welcome (it’s 80 minutes long). The pacing is quick, and it’s never more than a few minutes between action scenes, nudity, or groan inducing comic relief, so it’s hard to get bored. And if we’re giving points for eighties nostalgia value, then it would score at least an 8 out of 10 in that category if only for having all three of the decades premier scream queens together in one movie. That one movie is still very, very bad, but what did you expect? Joe Bob gives it 4 stars. I can’t go that high myself, but if you’re in the right mood it’s entertaining.
Posted by Bob Ignizio at 2:27 PM