31 Days Of Halloween 2018: Sometimes The Kids Can Drive 'Mom And Dad' A Little Crazy 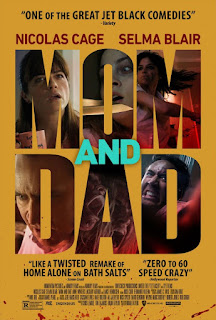 A black comedy in which parents are inexplicably overcome with the intense urge to kill their children is a premise that will likely be a deal breaker for many right off the bat. Me, I’ve seen enough movies where the shoe was on the other foot and kids were trying to off the adults that I figure turnabout is fair play. It’s not the idea, it’s the execution.


Well, after sitting through MOM AND DAD, I’m here to tell you the execution isn’t anything to write home about.


The film focuses mainly on one family: married couple Brent (Nicolas Cage) and Kendall (Selma Blair) and their two kids, high school age Carly (Anne Winters) and her younger brother Josh (Zackary Arthur). They're caught up in a strange pandemic, possibly spread by static on TV screens, that makes parents want to kill their children. And so the kids, with help from Carly’s boyfriend Damon (Robert Cunningham), spend most of the movie trying to fend off their parents without killing them. Further complications arise when grandpa and grandma (Lance Henriksen and Marilyn Dodds Frank) arrive for a visit.


Once we get into the meat of the movie, it becomes a violent, high stakes version of HOME ALONE. Brutal and gory punishment is dealt out by and to most of the characters. But no matter how debilitating their injuries would be in real life, everyone just shrugs them off like they were Warner Brothers cartoon characters. Which is why near the end, when one character looks like they probably died, it still feels as if the film should have confirmed it. After all, other characters endure things that should have killed them only to be up and about moments later.


The blame for MOM AND DAD’s failure lies with writer/director Brian Taylor. For starters, the script is bad. This is allegedly a black comedy. Unfortunately, there aren’t any laughs. The film’s central theme – that modern parents are still basically kids themselves and resent their offspring for cramping their style – should have had plenty of potential for satirical jabs. And maybe if Taylor had gone for a slightly more cerebral and deadpan tone, he could have gotten more mileage from that idea. Instead he tries to be edgy in his direction without going far enough over the top for his film to work on that level.


The worst example of Taylor's grating style is the obnoxiously frenetic editing. Instead of giving the film more energy, it just feels exhausting. There are also frequent jumps back and forth in time that only serve to kill whatever momentum the movie does manage to build.

One such flashback gets repeated at least 3 times in the movie. It has Cage’s character as a younger man doing donuts in his muscle car while a topless girl writhes on his lap. Aside from being redundant, it also makes me recall a far better scene in the unfairly maligned DRIVE ANGRY in which Cage has a lengthy fight scene while still engaged in coitus. Now that’s how you do over the top.


Nicolas Cage has been enjoying considerable good will of late thanks to the success of MANDY. And while everyone talks about how over the top he is in that movie, they usually fail to mention that for the first hour, he’s equally good being low key and real.

Whether it was a choice made by the director or the actor himself, here we never get to see that side of Cage. As a result, there’s not much difference between “normal” Cage and homicidal Cage. At least Blair gets a chance to show compassion for her kids and horror at the situation before going psycho herself, giving her transformation at least some emotional impact.


Critics have been kinder to MOM AND DAD than I would have expected just based on its premise alone. So if you still think you want to check this out, you’ll find no shortage of other reviewers to support your choice. For me, though, the film’s negatives make it a tough slog. No matter how much it tries to be a fun, edgy ride with something to say, it’s just boring, shrill, and unpleasant.