31 Days of Halloween 2018: 'The Ritual' Proves Once Again That You Shouldn't Take Shortcuts Through Unfamiliar Woods


[Once again I'm going to attempt to do a horror(ish) movie review a day for the entire month of October. I've done this the last few years on The Cleveland Movie Blog. Most of the time I succeeded (usually with the help of a few other writers). Other times I didn't. We'll see if I can pull it off this year.] 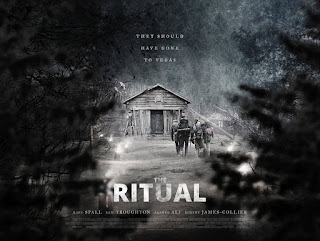 After a night out drinking with friends, Rob (Paul Reid) and Luke (Rafe Spall, SHAUN OF THE DEAD, HOT FUZZ) walk into a convenience store just as it is being robbed. Luke manages to hide, but the robbers spot Rob and demand he turn over his valuables. He’s fine with that until they ask for his wedding ring, and his refusal winds up getting him killed.


Six months later, Luke and the rest of Rob’s friends – Phil (Arsher Ali), Hutch (Robert James-Collier, Thomas Barrow on ‘Downton Abbey’), and Dom (Sam Troughton) reunite for a hiking trip in Sweden, something Rob had suggested they do together before he died. Luke is still dealing with guilt over not preventing Rob’s death, and at least some of his friends blame him, although they don’t say anything.

While on the hike, Dom suffers an injury. The cocky Hutch consults his map and decides they’ll get back to civilization sooner if they take an off-trail shortcut. Yeah, that’s always a good idea when you’re in an unfamiliar forest.


Once off the trail the guys discover a gutted animal carcass that’s obviously been put on display, and strange symbols carved into the trees. The shortcut turns out to be not quite so short, and they have to spend the night in the woods. And what better place to do that than a seemingly abandoned cabin that has a weird wooden statue of a headless human torso with antler hands, not to mention more of those strange symbols?


Not exactly a recipe for a good night’s sleep. And indeed, it isn’t, as everyone experiences vivid nightmares, complete with physical manifestations.


After this creepy and atmospheric setup, things only get worse for the intrepid travelers. There’s something in the woods stalking them, not to mention a village inhabited by whatever the pagan Swedish equivalent of the hillbillies from DELIVERANCE are. Things quickly become very tense, and there’s no guarantee that anyone will get out alive.


Director David Bruckner makes good use of his wilderness setting to keep his horrors hidden, but not entirely hidden, for most of the film. The cast is superb, and I especially enjoyed seeing James-Collier in a different role after spending so much time with him on ‘Downton’. He still plays kind of an asshole here, but a different kind of asshole.


Screenwriter Joe Barton has kept much of the action from the Adam Nevill novel this is based on, but the things he has changed are significant. Most notably, adding the subplot about Rob being killed, and the guilt and tensions that arise from that, gives the film more of a THE DESCENT feel, and of course brings in some different themes than were in the book.


Regardless, THE RITUAL is a pretty solid little horror flick. It’s smart, serious minded, and polished without being too polished. The monster, which draws on Norse mythology, is original and scary, and the special effects are well executed. It’s on Netflix, so if you’re a subscriber and a horror fan, there’s no reason not to check it out.
Posted by Bob Ignizio at 12:00 AM