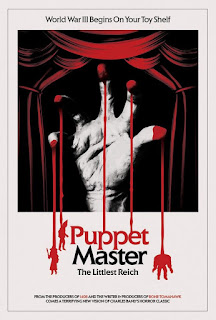 Because 12 PUPPET MASTER movies just wasn’t enough, the cheap and cheesy B movie franchise from Full Moon Productions has been rebooted with PUPPET MASTER: THE LITTLEST RIECH. The puppets are still the same cool looking deadly toys, but they mythos of the series has undergone some major changes. There’s also a bigger budget this time around, some actors you might actually know, and considerably more blood and gore than one might expect.


Working from a script by S. Craig Zahler (BONE TOMAHAWK, BRAWL IN CELL BLOCK 99), co-directors Sonny Laguna and Tommy Wiklund turn in a slick but sloppily put together film. It’s the kind of movie that seems to skip ahead at times, as if pages of the script were torn out to keep things on schedule and under budget. Which is certainly not unheard of in the world of “B” movies, so that may have been the case.

Anyway, the film begins with a flashback to the 80s in which we see Nazi toymaker Toulon (Udo Kier) send his lethal marionettes on a killing spree before being taken out by the local police. Flash forward to the present day, where we meet our protagonist, Edgar (Thomas Lennon), a slacker comic-book store clerk. Edgar’s late brother had a puppet that might just be one of Toulon’s creations, and since there’s a big Toulon murder convention going on, Ed figures he might be able to sell the thing there.


So along with his boss Markowitz (Nelson Franklin) and girlfriend Ashely (Jenny Pellicer), Edgar heads off to the con where various potential victims have gathered to celebrate the macabre killings, many bringing puppets of their own. Also on hand as convention tour guide is police officer Carol Doreski (Barbara Crampton), one of the officers who helped take down Toulon.


You can pretty much guess what happens from here: the puppets come to life and start dispatching convention guests in various creative and gruesome fashions. What, you thought they were gonna’ enter a cosplay contest or something?


So is THE LITTLEST REICH worth watching? I have two reviews for you.


Teenage/twenty-something me says check it out. It’s not a classic, but the puppets look cool as always, there are a lot of well-staged and gory kills, and a couple of the actresses get topless which, just being honest here, was a plus when I was that age.


Older, less hormonally influenced, and (arguably) wiser me is not as forgiving.


The biggest issue I have is in the way this film turns the PUPPET MASTER mythology on its head. Not because I particularly care about the mythology, but because it comes off as tasteless. And as John Waters always says, there’s good bad taste, and bad bad taste. This is the latter.


In the old films, Toulon and his creations fought against the Nazis. In THE LITTLEST REICH, they’re firmly on the side of the bad guys. They take particular delight in murdering minorities, and since many of the killings are played for gory comedy, that adds an extra layer of uncomfortableness to the proceedings. I don’t think the filmmakers are Richard Spencer fans or anything – it’s just that this is fairly sensitive material that requires a defter touch than is on display here.


As for the nudity, these days it just seems kind of dumb to me to throw bare breasts into a film for the purpose of titillation when there's zero eroticism. I don’t think the movie gets to the point of being gratuitous or leering, but of course others may feel differently. Regardless, not really a selling point for me these days.


Overall, this probably isn’t much better or worse than an average entry in the original franchise. As with those films, the well-designed puppets are the most notable aspect. The characters are one dimensional, the plot is simple and predictable, and the dialogue is best described as serviceable.


On the plus side, the score by frequent Lucio Fulci composer Fabio Frizzi gives the film a classy sheen, and is easily my favorite thing about the reboot. It’s also nice that the primary cast members are better than Full Moon’s usual standards, and like any horror fan I’m always happy to see Barbara Crampton and Udo Kier on screen. Finally, if you like your horror films with plenty of red meat, this one delivers. Definitely not for the squeamish.


But even without the questionable Nazi angle, that hardly adds up to a must-see movie. Especially when there are so many other, better horror films recently released or on their way soon. Ultimately, present day me would advise you to give it a pass.


Which version of me you want to listen to is up to you, but I can say from personal experience that teenage/twentysomething Bob’s judgment on many things was probably not the best.
Posted by Bob Ignizio at 12:58 AM