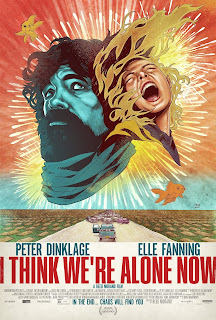 In the opening scenes of Reed Morano’s I THINK WE’RE ALONE NOW, Del (Peter Dinklage) is making his way through a deserted small town. Rush plays over his headphones as he stops to investigate each house, spray painting an “X” in the street so he knows he’s been there. If he finds dead bodies inside, he dutifully removes them and takes them to a field for burial.

This is Del’s post-apocalyptic routine now, a way to have a sense of purpose in a world where he may very well be the last person alive. It also keeps him thinking too much about the horror of what has happened.


For an outsider like Del, it's almost like paradise. But this comfortable post-apocalyptic existence hits a bump when a young woman named Grace (Elle Fanning) unexpectedly enters Del's' life.

While many of us would be glad of the company, Del is not. He does everything he can to drive Grace away, but she keeps following him nonetheless. Eventually, though, Grace seems to get the hint. It’s only as she’s about to leave that Del realizes spending the rest of his life alone might not as much fun as he thought. And so, he and Grace agree to a trial period of coexistence.

Most of the film consists of these two learning to deal with each other until an external conflict eventually enters in the third act. I wouldn’t want the spoiler police coming after me, so I don’t want to say too much more. Only that the film uses this conflict as a means to contrast a realistic approach to existence with a happier, but artificial one.

I really liked the sober, minimalist feel of this film. It doesn’t waste a lot of time on exposition or explanation. It doesn’t matter why everyone suddenly died; they just did. There’s precious little action, but Morano never lets her film become boring.

Much of that is due to the fact that Del and Grace are interesting characters to spend an hour and a half with, and it certainly doesn’t hurt having such excellent actors in the roles. A more typical film might have forced these two into an unlikely romance. Here, it’s enough that they reach a level where they would rather be around each other than not.

It also helps that Morano keeps the running time tight, with I THINK WE’RE ALONE NOW clocking in at just around 90 minutes.

As for the themes, what could be more universal than loss, grief, and the longing for companionship? You don’t have to be the last person on earth to relate to that. And of course the aforementioned ideas about facing reality versus living in a fantasy world have real resonance in a world in which some people would deny unpleasant truths like climate change so they can go on living the way they always have rather than face facts and work to change things.

Despite its grim premise, I THINK WE’RE ALONE NOW is an enjoyable and thoughtful film that manages to achieve its modest goals and leave the viewer with food for thought. It recalls films like THE OMEGA MAN (or I AM LEGEND if you prefer) and the classic Twilight Zone episode “Time Enough At Last” without feeling overly familiar. It’s not a great film, but it’s a solidly good one, and provided you don’t need zombies, cannibals, or mutants to make your apocalypse complete, I recommend checking it out
Posted by Bob Ignizio at 1:29 AM