31 Days of Halloween 2018: Oppression Unleashes A Monster In 'Ghoul' 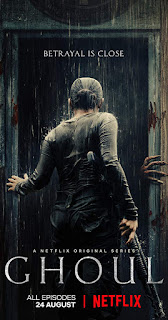 The United States isn’t the only country with a populist authoritarian for a leader these days. India’s Prime Minsiter Narenda Modi has that kind of reputation, too. And it’s likely Modi’s policies towards religious and ethnic minorities inspired the new Indian horror miniseries GHOUL (GHUL), currently available to watch on Netflix.


This three-part tale is set in a not-too-distant dystopian future where India’s government has transformed into full blown fascism. Anyone who doesn’t tow the party line is suspect, especially Muslims. Despite being a Muslim herself, military cadet Nida Rahim (Radhika Apte) is determined to prove to her superiors that she’s loyal to the regime. She’s so loyal, in fact, that she turns in her own father (S.M. Zaheer) for teaching his students ideas that aren’t exactly on the approved list. She figures some time in a re-education camp will do the old man some good.

A slight flash forward, and Nida is now a military interrogator who has just been assigned to a prison camp where she must question dreaded terrorist Ali Saeed (Mahesh Balraj). The head of the camp, Colonel Sunil Dacunha (Manav Kaul), fully supports Nida. His second in command Laxmi Das (Ratnabali Bhattacharjee), however, thinks Nida is just as deserving of a being in a cell as Saeed.


During the interrogation by Nida and others, Saeed turns the tables by revealing secrets about his captors and setting them against each other. But that’s only the beginning. At this point, Saeed (or whatever Saeed really is) is just toying with his jailers.


The plot is fairly straightforward and the message about intolerance and fascism is clear enough that any viewer should pick up on it. Certainly we’ve seen other films tackle similar themes and material, but thanks to the unique cultural and folkloric aspects, as well as Patrick Graham’s tense direction, GHOUL manages to be both fresh and gripping. And it certainly doesn’t hurt that the titular fiend is super creepy.


Originally conceived as a series of three feature films, it’s hard to say if breaking the first film into three 45-minute episodes makes much of a difference. After all, 2 hours and 15 minutes isn’t that much longer than the average feature (and it’s shorter than most Indian films). Regardless, GHOUL works just fine this way, and the endings of each episode feel organic. One can easily blaze through the whole thing in one night, or choose to spread it out a bit without losing any of the tension or dramatic momentum.


Netflix presents GHOUL in a wide range of language and subtitle options. Normally I would have watched in the original Hindi with English subtitles, but I wound up watching this with the English dub and it came across just fine. The dubbing actors did a fantastic job of synching up with the onscreen cast.


Despite the original plans for GHOUL to spawn sequels, it feels about as self-contained as any horror movie.  In other words, of course it’s left open for a sequel, but if one should never materialize, it’s still a satisfying film/show. That said, there seems to be enough left to explore both thematically and in terms of story that I’m hoping the other installments do get made.
Posted by Bob Ignizio at 12:00 AM