This is a longer review than usual because this is a film that warrants it. 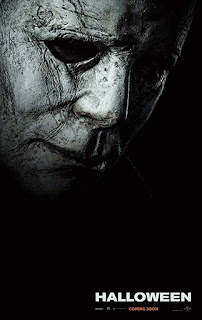 I have no doubt that writer/director David Gordon Green is a fan of the horror genre in general and John Carpenter’s 1978  HALLOWEEN in particular. The director of both notable indie films like GEORGE WASHINGTON, and stupid but fun stoner comedies like PINEAPPLE EXPRESS, Green has expressed interest in making a horror film for a while. In fact, he had been attached to direct a remake of SUSPIRIA and had evidently spent some time developing it. However, that fell through. Instead Green, along with his writing partners Danny McBride and Jeff Fradley, wound up making HALLOWEEN, a higher profile project that comes with both greater risks and greater potential rewards.


Off the bat, it’s fair to say that HALLOWEEN is not some half-assed quickie cash-in. Whatever criticisms one might level against it (and I will be leveling some shortly), it treats John Carpenter’s original and its fans with respect. It also treats the film’s sequels, which range in quality from mediocre to downright awful, with no respect, acting as if none of them ever happened. So if nothing else, I appreciate HALLOWEEN for that.

The premise is that sometime after the final scene of Carpenter’s film, killer and alleged literal boogeyman Michael Meyers was captured and returned to Smith's Grove Sanitarium. Now 40 years later, Meyers (Nick Castle, who played the role in the original film, and stuntman James Jude Courtney) is about to be moved to a new mental institution.


Actor Donald Pleasance having long departed this mortal coil, the film replaces his Dr. Loomis with Dr. Ranbir Sartain (Haluk Bilginer). And when I say he’s replaced Loomis, I mean he even has the same accent and penchant for florid dialogue. That said, he differs from Loomis in at least one big way, having a far more sympathetic view of his patient. Which, given that Loomis felt Michael was pure evil personified and should not just be killed, but incinerated just to be sure, is a pretty low bar to clear.


In a pre-credits sequence, Sartain allows a couple of British podcasters (Jefferson Hall and Rhian Rees) to attempt an interview with Michael, despite the fact that the guy isn’t exactly known for being talkative. He’s also encouraged them to bring along Michael’s old mask, figuring that might loosen Michael’s tongue. All it does is disturb the other patients in the yard, at which point the iconic Halloween theme starts to play over the credits, which depict a smashed pumpkin reconstituting itself. Kind of a nice little metaphor there.


Since Michael didn’t exactly give them a lot of quotes, the podcasters next pay a visit to Laurie Strode (Jamie Lee Curtis), who managed to survive Michael’s reign of terror in the first film. Laurie was understandably traumatized by her experiences, and now lives in a fortified cabin surrounded by a gate and security cameras. On the plus side, though, at least that horrible wig she wore in HALLOWEEN II got retconned out of her past. Anyway, she agrees to let the podcasters in after they offer to pay her $3000.


Finally, we get to the meat of the main plot. Laurie had a daughter at some point after the original film. Since Laurie gave her little girl sort of a Unabomber childhood focused on survivalist training, children’s services eventually intervened.


Laurie’s daughter, Karen (Judy Greer), is now an adult and married to Ray (Toby Huss). She also has a daughter of her own, teenage Allyson (Andi Matichak). Laurie is marginally a part of their lives, but the way she goes on about how they need to be ready in case Michael escapes drives a wedge between them.


All these characters, most of whom have at least some kind of arc, detract from the central plot of Laurie being a survivor of assault, and the ways that has affected not only her, but her family. Even if you don’t care about the movie on that level, it doesn’t exactly make for a smooth flowing horror film, either. And honestly, some of these characters could easily have been eliminated to streamline the film, their mostly minor functions in the plot given to someone else.


Instead we have to wait for Michael to start shearing off some of the film’s fat in brutal fashion. Green doesn’t revel in violence and gore to the degree Rob Zombie did in his remake, but this is still a much bloodier film with a much higher body count than Carpenter’s original. Depending on your tastes in horror that could be either a plus or a minus. I’ll just say I don’t think the way Green stages the kills is nearly as effective as Carpenter, although you can see him at least trying.


When the film keeps its focus on Laurie, her family, and Michael, it works pretty well. You can see why Carpenter would have thought there was enough potential here to lend the film extra credence with his name and participation, and why Curtiss as an actress would have wanted to come back to the role that made her a star. Less satisfying are the story arcs for Dr. Sartain and the Brit podcasters. And with all the other characters vying for screen time, Allyson’s friends are little more than potential victims rather than the fully formed characters that Laurie’s friends were in Carpenter’s film.


I also have to say I found some of the dialogue grating. Yes, Carpenter’s HALLOWEEN features plenty of slang and cultural aspects that make it very firmly of its time. But some of the words coming out of the character’s mouths in this film aren’t so much of their time as they are of Danny McBride. There are a few instances of comic relief that could just as easily have come from an episode of EASTBOUND AND DOWN or VICE PRINCIPALS. Thankfully there aren’t a huge number of those moments, but the ones that are here took me out of the film. On a similar note, while some of the nods to the original film are fine, others stuck out to me as a bit too cutesy.


On the plus side, Jamie Leigh Curtis kills it. But then we all knew she would, right? I also liked a small, throwaway scene between Allyson’s friend Vicky and the little boy she’s babysitting (Jibrail Nantambu) that showed some real heart. And it’s no surprise that John Carpenter, along with his son Cody and Daniel A. Davies (son of Kinks guitar player Dave) have composed a score that brings back the best motifs from the original film, while adding some impressive new cues.


I know it probably seems like this review is a bit hard on the movie. For sure, I’ve given cheaper, shoddier films than this more positive sounding reviews. But that’s because when you aim higher, as Green and company have, even minor issues tend to stick out more. At least for me, they do. And while I didn’t hate this HALLOWEEN, the chances that I’ll feel the need to put it on every time the holiday rolls around like I do the original are pretty slim. Feel free to leave your hate-filled rebuttals in the comments section.
Posted by Bob Ignizio at 12:00 AM