31 Days of Halloween 2018: Kill Your TV Before It Kills You In 'Await Further Instructions' 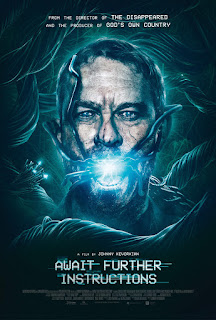 Not all fears involve matters of life and death. Some are far more mundane. Like, for instance, the fear and dread many young adult to middle age liberals feel about going home for the holidays and being forced to spend time with relatives whose ideology is considerably more conservative. It’s a small fear in the greater scheme of things, but one far more likely to be realized than, say, getting eaten by a shark or stalked by a slasher. Also, small fears can serve as precursors to larger, more dangerous ones. That’s the vein of horror mined by British indie horror film AWAIT FURTHER INSTRUCTIONS, and it does so to great effect.


The film begins with Nick Milgram (Sam Gittins) and his middle eastern girlfriend Annji (Neerja Naik) arriving at his parents’ home for Christmas. Mom Beth (Abigail Cruttenden) is slightly taken aback, but more or less accepting of Annji. Dad Tony (Grant Masters), however, is clearly not pleased, and grandpa Alfred (David Bradley) is openly hostile and racist. Nick’s pregnant sister Kate ((Holly Weston) is only casual in her racism, but she has plenty of contempt and envy for her brother. Her boyfriend Scott (Kris Saddler) is just kind of a dumb mook. From the outset, the odds of a pleasant holiday are not in Nick and Annji’s favor.

Not surprisingly, dinner is a bit tense. But things only get worse when everyone wakes up the next morning to find the house completely encased in a strange black barrier, and the TV broadcasting only an alert to “await further instructions”. And then the instructions start to come. And things get really bad.


Nick, who is resented by most of his family for always thinking he knows better, is resistant to following the increasingly dubious instructions from the TV. Tony, however, has more of an authoritarian streak. He’s convinced that what he’s seeing on the TV are orders from the government and must be followed. Even when Anjii, a medical professional, explains why certain of those orders might not be safe to follow. Tony (and of course Alfred) are quick to not only dismiss her, but to view her with outright suspicion.


While there are certainly any number of parallels to current events here in the United States, AWAIT FURTHER INSTRUCTIONS is distinctively British. It’s kind of like an episode of ‘Dr. Who’ in which the Doctor never shows up, and humanity has to try and save the day on their own. Any Whovian can guess how that turns out.


Working from a deft and insightful script by Gavin Williams, director Johnny Kevorkian keeps the tension and the stakes high. While this is absolutely a horror/science fiction film, it always stays grounded and focused on its characters, and the ways human nature so often leads to bad ends. Add George Romero and Rod Serling to the list of apt comparisons. The budget is relatively low, but when the script does call for special effects they don’t come across as cheap or shoddy. There’s not a lot of violence or gore, but that doesn’t make for a film that is any less unsettling.
Posted by Bob Ignizio at 11:34 AM