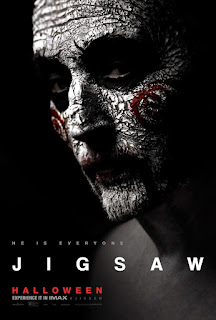 
Jigsaw/John Kramer (Tobin Bell) has been dead since the third installment of the series, the trick is somehow managing to bring the character back in each new film without actually bringing him back. After all, Jigsaw isn’t some supernatural entity like Freddy or Jason. Or is he?


Because once again Jigsaw is playing his games with a group of morally compromised people. Gruesomely mutilated bodies are starting to pile up. Detective Halloran (Callum Keith Rennie) suspects one or both of the medical investigators who have autopsied the latest victims - Eleanor (Hannah Emily Anderson), who in her spare time collects Jigsaw memorabilia, and Logan (Matt Passmore), an Iraq war vet whose wife was killed in a home invasion. Detective Keith Hunt (Clé Bennett) has other suspicions.


The film cuts between the investigation and a group of people trying to escape Jigsaw’s latest batch of devious traps. All they have to do is confess their sins, but of course they don’t. And so we’re treated to a number of spectacularly gory demises before the game (and the movie) runs its course. There is a, of course, a surprise twist that isn’t all that much of a surprise. Also, of course, further sequels are set up.


Nothing in this movie will come as a surprise to anyone familiar with the franchise. It is the very definition of formulaic. The direction by The Spierig Brothers is competent and somewhat stylish, but not enough to transform the by-the-numbers script from Josh Stolberg and Peter Goldfinger into something interesting enough to warrant watching by any but the most devoted fans of the series. It’s okay, but honestly, there have to be better things you could be doing with 90 minutes of your time.
Posted by Bob Ignizio at 5:05 PM