31 Days of Halloween 2018: Homemade Scares Are The Best Scares In 'Haunters: The Art Of The Scare' 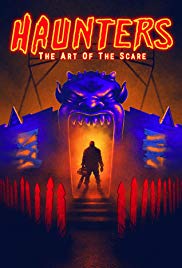 The documentary film HAUNTERS: THE ART OF THE SCARE focuses on three figures in the "haunted attraction" scene: Donald Julson, a former Hollywood prop designer who makes an elaborate but still fairly traditional haunted maze in his home every Halloween, Russ McKamey, a wedding singer and D.J. whose extreme “McKamey Manor” haunted house goes well beyond most people's comfort zones, and haunt actor Shar Mayer, who has been dressing up to scare people for decades now, working in just about every variety of haunted attraction one could imagine. There are also brief asides to visit Blackout, another extreme haunted attraction that goes so far as to include nude actors, and an interactive "haunted play" that has a storyline that incorporates its audience.


One of the major aspects of the film seems to be determining where the line between good, scary fun and physical/psychological abuse is drawn. Given that a large segment of the public seems to want more extreme scares, that’s not as easy to pin down as one might think.


Wherever the line is drawn, I tend to think McCamey is well on the other side of it. He doesn’t believe in giving his guests safe words, and some of his scares use genuine torture techniques. The way he takes delight in torturing his customers, I think the only word to accurately describe him is sadist. And while most people who go through his rigorous screening process and sign his waivers seem satisfied with the experience, that’s by no means true for everyone.


Julson is more my kind of haunter. While he and McKamey both put a great deal of work and creativity into designing and building their haunts, Julson isn't trying to scar anyone for life. It’s a hell of an investment of both time and money for something that’s only up for Halloween, so it’s hardly surprising that his wife, considerably less into Halloween than he is, feels a bit like a widow at times.


As for Shar, the veteran actress, she’s addicted to scaring people. And it’s not as easy a job as you might think. If you do it well, as she does, there’s always the risk that you might get injured by one of your customers. Shar has actually suffered permanent damage from one interaction gone wrong, but she still looks for ways to keep haunting.


All three stories have their interesting and dramatic aspects, but the film seems to focus the most on McKamey. Given the extreme nature of what he does, and the kind of reactions that he elicits, it just makes sense. There's just a little bit more to explore in his story. All three main subjects get their due, though.


Directed by Jon Schnitzer, the documentary is well paced and blends its three mains stories together well into one overarching narrative. If you’re a fan of haunted attractions and the Halloween season, it’s hard to imagine you wouldn’t enjoy this. I'd certainly take it over a walk through McKamey Manor any day.
Posted by Bob Ignizio at 12:00 AM