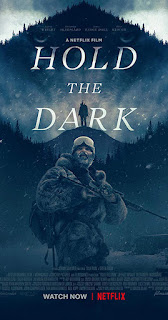 The Netflix original feature HOLD THE DARK has a lot going for it. It creates a great sense of place with its rural Alaska setting. That in turn contributes to a tone of cold, quiet desolation. The WICKER MAN-esque trappings of strange pagan wolf-based beliefs are suitably unnerving. Jeremy Saulnier’s grindhouse meets arthouse style is just as potent as it was in BLUE RUIN and GREEN ROOM. And the cast boasts such reliable solid players as Jeffrey Wright, Alexander Skarsgård, and Riley Keough. Unfortunately there are issues either inherent in the source novel by William Giraldi or in its adaptation for the screen by Macon Blair that make HOLD THE DARK a frustrating experience.

Wright plays wolf expert Russell Core. He’s been called in to kill a pack of wolves responsible for the deaths of 3 children by Medora (Keough), the mother of the most recent victim. As it turns out things aren’t entirely as they seem, though. Medora likes walking around wearing nothing but a wooden wolf mask and trying to get strange wolf experts to strangle her. It also turns out that she’s the one responsible for the death of her son, which Core discovers after she has gone on the lam.

The boy’s father Vernon (Skarsgård) is a soldier stationed in Iraq. He seems to have a personal code that supersedes his loyalty to country, as we witness him killing a fellow soldier for raping an Iraqi woman. Shortly after that, he is wounded as sent home to learn of his son’s death.

Vernon’s response to this news is to kill the messengers. Then, with the help of another villager who lost his child, Cheeon (Julian Black), Vernon steals his son’s body and buries it after first performing some kind of blood ritual. Vernon sets off in search of Medora, while Cheeon stays behind to keep anyone from following Vernon. He does a pretty good job of it, too, taking out a good number of cops before Core and Police Chief Donald Marium (James Badge Dale) are able to stop him.

Now, at this point, I have questions. If Vernon wanted to track down his wife without anyone following him, wouldn’t it have made more sense not to kill all these innocent people? Doesn’t that just insure a larger, more aggressive pursuit? And given that the film makes a point of showing Vernon’s moral code in Iraq, how does killing all these people who had nothing to do with his son’s death jibe with that?

The movie kind of lost me here, at what would be about the halfway mark. And while I stuck with it because of the quality of acting and direction, hoping for some sort of satisfactory explanation, I never got one.

I’m less concerned with the lingering questions about the whole wolf mask thing, and what exactly Vernon and Medora are (Werewolves? Members of some kind of weird religious cult? Just plain crazy?), but a little clarification on that front might have been nice, too. Ambiguity is fine, and I often prefer it. In this case, however, the audience needed more information to understand why the characters did what they did.

It’s also hard to know how to feel about the film’s themes, which are murky as well. Obviously there’s something here about revenge and family, but unlike in Saulnier’s BLUE RUIN, it’s unclear what this film is trying to say about those subjects. I can only wonder if perhaps the book this is based on featured more internal monologues by the characters that helped explain things. Like I said in the beginning, it’s a frustrating experience. I still think Saulnier is one of the best new American directors, but I’m hoping next time around he goes back to writing his own material.