31 Days of Halloween 2018: 'The Haunting Of Hill House' Presents Us With A Different Kind Of Spectre 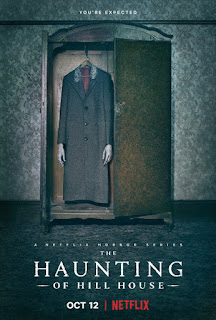 Unlike past film adaptations in 1963 and 1999 that went by the title THE HAUNTING, the new Netflix limited series ‘The Haunting of Hill House’ uses the full title of the Shirley Jackson novel on which it is ostensibly based. Do not mistake this as an indication of greater fidelity to the source material. If anything, this latest version should be considered more of an “inspired by” than an “adapted from”.

That’s not necessarily a bad thing, though. I’ve always been of the mind that when a band does a cover tune or a filmmaker does a remake, if they don’t have something new and fresh to bring to the table, what’s the point? And if nothing else, series creator/director/writer Mike Flanagan has plenty of new ideas he wants to incorporate into this tale.

Most of those names will be familiar to fans of the book or previous film versions. Hugh Crain was the patriarch who built Hill House in the novel, and possibly one of the malevolent spirits that still resides there. Eleanor, Theo, and Luke are the names of the people Dr. Monatgue asked to participate in his study of the house, and Shirley, of course, is from ‘The Haunting of Hill House’ author Shirley Jackson (there doesn’t seem to be any direct antecedents for Steven or Olivia.). There are some aspects of these characters that match up with their namesakes where applicable. Notably, Theo has psychic abilities, and Eleanor is particularly sensitive to the house. For the most part, however, these are new and different characters. Hill House, however, is still just as haunted and malevolent as ever. Or is it?

Each episode is about an hour in length, with a few going past the 60 minute mark. That allows for a lot of character development and thematic depth that one couldn’t explore in a feature film. It also allows for a certain amount of self-indulgence and padding, too. Nothing too egregious, but my gut feeling is 6 or 8 episodes would have given the series a little more punch than stretching it out to 10. Regardless, the characters and plot remain compelling throughout, and one usually doesn’t have too long to wait before the next scare.

The themes are considerably different than those explored in Jackson’s book and past adaptations. The focus is on family issues: love, forgiveness, and most importantly, dealing with loss and grief. Despite these concerns, the series finds ways to incorporate plenty of scares that genuinely work at face value, while also enhancing those underlying themes.

I had been willing to dismiss a few minor issues with the series because the parts that worked, worked well. But when all is said and done, with an ambitious work such as this, it’s important to stick the landing. And ‘The Haunting of Hill House’ does not stick the landing. I won’t give any spoilers, but the ending is kind of a mess that undermines its horror aspects in favor of an emotional, tug at the heart strings resolution, complete with banal indie folk soundtrack. To be fair, this is what the series had been building towards the whole time, and I probably should have recognized it. And I might even have been okay with it, if it hadn’t been done in such a schmaltzy manner.

I guess for me, as much as I like it when an artist puts their own stamp on something, I still want to be able to recognize the core of that thing underneath it all. Aside from a few nods here and there, Flanagan’s take fundamentally alters what Jackson’s novel was about. And at the same time, it retains too much of its inspiration to be wholly original. That’s a precarious balancing act. Amazingly, Flanagan almost pulls it off. But for me, at least, he still ultimately lets it all come crashing down in the end.

There’s enough in this ten part series that I did enjoy to still warrant a soft recommendation. Considering my opinion on ‘Hill House’ is a minority view, chances are fairly good you’ll like it better than I did. I just can’t lie and say I wasn’t personally disappointed in it.