*Note: Well, apparently I didn't pull it off. Missed a couple of days because life. Might get caught up, but don't hold your breath* 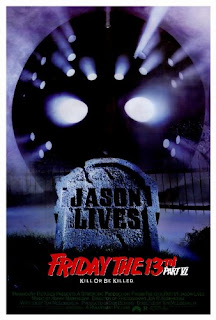 FRIDAY THE 13TH PART VI: JASON LIVES will always have a special place in my heart. Not because it’s particularly good, but because it entered my life at just the right time and in just the right context to make a lasting impression. The film had its theatrical release in August of 1986 and would be the very first FRIDAY film I saw in a movie theater. This was a pretty big deal to teenage me.

As the film opens, Jason Voorhees, the killer in most of the FRIDAY THE 13TH films has ostensibly been killed in the laughably titled fourth installment, FRIDAY THE 13TH: THE FINAL CHAPTER. Jason’s killer was a young special effects artist named Tommy Jarvis (originally played by then 12-year-old Corey Feldman). Tommy then returned in FRIDAY THE 13TH PART V: THE NEW BEGINNING. Now living at a group home for mentally unstable teens, when a Jason impostor starts killing his house mates Tommy once again takes out the big bad. But in a twist, he seems to become a crazed killer himself at the film’s conclusion.


That last bit seems to have been forgotten as JASON LIVES opens. Tommy (Thom Matthews, star of RETURN OF THE LIVING DEAD) and his friend Allen (Ron Pallilo, known to old bastards like me for playing Arnold Horshack on the 70s sitcom “Welcome Back Kotter”) make a nighttime visit to the cemetery where Jason is buried. Tommy wants to make sure Jason is really dead. And the only way to do that is by digging up his grave and sticking a big metal spike into Jason’s corpse. Of course as he does this, there’s a thunderstorm. Lighting strikes the spike, and as we all know from science class, that brings Jason back to life.

This is the movie where Jason went from being some sort of ill-defined, seemingly indestructible deformed human to full on zombie. Of course, it’s ridiculous, but this movie embraces the ridiculous so fully that it works. Hell, it makes more sense than Jason ostensibly being mortal and still surviving all the wounds inflicted upon him in parts 2 through 4, not to mention his initial drowning as a child. It’s almost as if the producers of this series didn’t really care about plausibility.

Meanwhile, Tommy heads into town where he tries to convince the local Sheriff (David Kagen) that Jason is back from the dead. Not surprisingly he doesn’t buy it, and locks Tommy up. Of course the old camp is opening back up the very same night, and the Sheriff’s daughter Meghan is one of the counselors. While bodies pile up, Meghan pays a visit to her dad’s police station. When she sees Tommy in a cell, she decides he’s cute even though he’s probably insane and helps him escape. More bodies pile up, and eventually Tommy has another showdown with Jason.
As you can see, other than the zombie angle this is standard fare for a FRIDAY THE 13TH installment as far as the plot goes. But there are several things that make JASON LIVES stand out from the rest of the FRIDAY sequels.

First off, there is considerably less gore and nudity than other installments. It’s not PG-13 level, but it comes close. As an avid reader of Fangoria at the time, I know part of this was due to the MPAA starting to clamp down on slasher films due to public backlash. But part of it was simply the fact that director Tom McLoughlin (who had previously helmed the fun PG horror entry ONE DARK NIGHT) wanted to make more of a traditional horror/monster movie while still working within the constraints of the FRIDAY THE 13TH template. At least that’s what the man himself says in the director’s commentary.

There’s also a degree of self-awareness to the film, proving that Wes Craven’s SCREAM, while arguably a better film, wasn’t the first slasher flick to go meta. There’s a married couple in a car who, when they see Jason, try their best to get out of dodge because they’ve seen horror movies before (spoiler: they still get killed), and the cemetery caretaker comments directly on the action in the film a couple of times, almost as if he’s talking to the audience.

McLoughlin’s direction is pretty solid, resulting in a more polished film than most in the series. The acting is considerably better, too, with Thom Matthews making Tommy a hero we actually want to root for, even if he is pretty dumb.

What it all adds up to is, dare I say it, almost a good movie. I’d say it’s the only installment of the series other than the first two that’s worth watching for anything other than nostalgia value. The first two have more of the elements one looks for in a slasher movie, but if we’re going strictly by traditional standards of cinematic quality, PART VI has the edge. That said, the eighties nostalgia value does add to the entertainment. Not exactly mandatory viewing, but if you’re in the mood for a Jason flick, this one is worth a watch.
Posted by Bob Ignizio at 4:43 PM