31 Days of Halloween 2018: 'The Evil Of Frankenstein' Could Stand To Be A Little More Evil 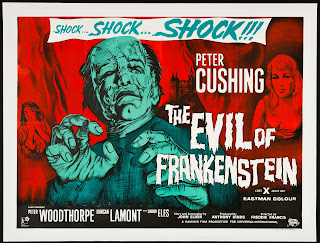 For a film titled THE EVIL OF FRANKENSTEIN, Peter Cushing’s amoral Baron is uncharacteristically heroic here. Apparently that’s because Hammer Films, the makers of the Frankenstein films starring Cushing, had entered into a distribution deal with Universal Pictures about this time. That allowed them to make a Frankenstein film more in line with Universal’s classic take on the monster, right down to the props in the Baron’s lab and a more Karloffian, square-headed monster.


That’s not to say the Baron is totally a nice guy here. The film begins with a terrified young girl witnessing someone steal the body of a dead relative. She then runs screaming into the woods where she runs smack dab into Frankenstein, who evidently didn’t want to get his own hands dirty. He doesn’t harm her, but it’s clear he could care less about any emotional scarring he’s caused. His work is too important.

Still, this is a different Baron than we saw in the first two films of the series, CURSE OF FRANKENSTEIN and REVENGE OF FRANKENSTEIN. Those movies have been completely retconned in a flashback that presents viewers with a new past for the Baron and his creation alike.


Setting the main plot in motion, the Baron and his assistant Hans (Sandor Elès) return to the scene of his crimes against nature. Once there, they meet Rena (Katy Wild), a deaf mute, who them to where Frankenstein’s original creature (Kiwi Kingston) has been on ice for the past ten years.


Of course, Frankenstein can’t resist bringing his creation back to life again. But there’s something wrong with the brain; the creature just sits around in a catatonic state. Enter hypnotist Zoltan (Peter Woodthorpe), who manages to get the hulking brute up and moving again. The Baron is thrilled, but he’s too wrapped up in his work to realize Zoltan has plans of his own for the monster.


Despite having the go-ahead to use the classic Universal version of Frankenstein, the Hammer make-up department comes up woefully short in trying to recreate it. The results look like something that came out of a kid’s do-it-yourself monster makeup book. It doesn’t help that Kingston, a pro wrestler from New Zealand, gives a performance that conveys neither menace nor empathy. He’s just a big, silent guy stiffly lumbering around.


As for the Baron, he’s still too arrogant to be a likeable hero. He has a point when he rants about the short sightedness and hypocrisy of those who persecute him, but he kind of undermines it with his shady ethics, never mind the way his creation is easily turned into a killing machine by a two-bit carnival performer.


Director Freddie Francis, who helmed several Hammer horrors when he wasn't earning academy awards for his cinematography on more respectable films, has been quoted as saying, "Horror films have liked me more than I have liked horror films". He generally did some excellent work in the genre despite that, but his sentiments definitely come through here. It’s hard to expect any director to be fully engaged in as bland a screenplay as the one written for EVIL by producer Anthony Hinds (under his John Elder pseudonym), though.


Nonetheless, EVIL OF FRANKENSTEIN is still a Hammer film, and as such it has that distinctive look and atmosphere that permeates all their period horrors. There’s also the spicy undercurrent of sex and sadism that was a Hammer hallmark. And even though the character has been toned down, Peter Cushing still gives a fine performance as the Baron. He simply wasn’t capable of less. I feel I must also note a particularly egregious and frankly funny bit of Hammer cleavage (another studio trademark) .When we first see the Burgomaster with his lady friend, the shot truly exemplifies the term “heaving bosom”. I can’t really recommend the film, but if you’re a Hammer fan you’ll likely find it passable.
Posted by Bob Ignizio at 12:00 AM