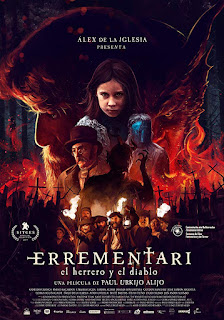 No, Paul Urkijo Alijo's ERREMENTARI isn’t a movie about Sherlock Holmes suffering with a speech impediment. Rather, it’s a Basque language dark fairytale about a blacksmith who gets killed in the war, makes a deal with the devil to come back and see his wife one last time, and predictably has the bargain go bad. But rather than pay the agreed upon price for this demonic con job, Paxti (Kandido Uranga) refuses to go to Hell. Instead, he captures the demon (name of Sartael, played by Eneko Sagardoy) sent to claim his soul, and imprisons it in a cage inside his old blacksmith forge. And to ensure that no one sets it free, he walls off his property and sets traps around it. If the villagers spread tall tales about him doing various evil misdeeds, like capturing and killing children, all the better to keep them away.


But the best laid plans, yada, yada. In the town near the blacksmith’s forge, there is a little girl named Usue (Uma Bracaglia). The local children taunt her because of her mother’s suicide, and one particularly nasty little boy tears the head off Usue’s doll and throws it over Paxti’s heavily fortified wall. When Usue ventures onto the blacksmith’s property to retrieve her toy, she also discovers a little boy locked in a cage. Knowing the stories about Paxti, Usue agrees to get the key to the cage and set the boy free. But things are not exactly as they seem.

Apparently based on an actual fairy tale and adapted by director Paul Urkijo Alijo and his co-writer Asier Guerricaechevarría, you could almost (almost) call ERREMENTARI a children’s film. I’m not recommending that parents let their kids see this without checking it out first (it’s rated TV-MA, which is equivalent to an R), but honestly I would have put it closer to a PG-13. There’s some violence and gore, but either it’s not all that much, or watching APOSTLE, MANDY, and MALEVOLENT in the last month has thrown off my calibration for such things.


In its look and style it recalls both Guillermo Del Toro and Terry Gilliam, but has a more down to earth, less self-important feel to it. This is not the kind of film that’s going to get nominated for any of the more prestigious awards like the Oscar or Goya, but it’s not surprising that it has won best features at a couple of fantasy film festivals.


I’ve seen some truly amazing horror/dark fantasy films so far this month (the aforementioned MANDY and APOSTLE), and ERREMENTARI isn’t on the same level. That said, I’ve also seen a lot of mediocrity and outright crap, and this is lightyears above that stuff. Just a good, solid, entertaining film, and one that’s refreshingly different from most recent genre films.


One final note – I watched the dubbed version with the subtitles on, and since the subtitles were a translation of the original Basque language version, they didn’t always match up, revealing some small but interesting differences. I actually liked some of the dialogue in the dubbed version better, but because the dubbing is so obvious here, I think the original language with subtitles is still the better option.
Posted by Bob Ignizio at 11:38 AM

I just finished watching "Errementari" on NETFLIX. I liked it a lot because the story was interesting, it looked and sounded good and had a feel that was natural. Your review was fair and accurate.
Some other reviews I read were critical and focussed more on what the movie wasn't than on what it was.
I'm glad I took a chance on it. And thanks for your review.
Michael