[I wanted to write something about my favorite kid friendly horror comic for Halloween, so I did.] 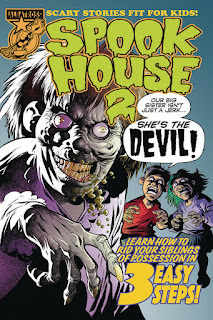 Writer/artist/publisher Eric Powell is probably best known for his action/horror comic book ‘The Goon’, in which thuggish anti-hero The Goon and his diminutive sidekick Franky battle zombies, witches, and other forces of evil. That book is on hiatus at the moment, but you should definitely check out the collected trade paperbacks. They’re a lot of fun.


At the moment Powell’s primary focus is another action/horror book called ‘Hillbilly’, but he’s also found time to do something that is all too rare these days. His Albatross comics company has given a home to ‘Spook House’, a horror anthology miniseries of “scary stories fit for kids.”

That there could be horror comics appropriate for all ages was nothing unusual when I was growing up in the seventies. At the time DC comics still published all-ages horror titles like ‘Ghosts’, ‘Weird War Tales’, ‘Plop!’, ‘House of Secrets’, ‘House of Mystery’, and of course, the original incarnation of ‘Swamp Thing’. And Marvel had ‘Man-Thing’, ‘Tomb of Dracula’, and ‘Ghost Rider’. These days, though, most horror titles are aimed at the mature readers market, leaving younger fright fans out in the cold. So ‘Spook House’ is truly a welcome title, at least in my house.


The first incarnation of ‘Spook House’ ran for 5 erratically published issues between October 2016 and June 2017. It was a real blast to have a comic that both I and my young son (5/6 at the time) could enjoy equally. Now Powell has brought the title back for a 4-issue weekly run in October as ‘Spook House 2’, and the first issue is everything I hoped it might be.


The first story is “Disgusting Monsters From Planet Glorgorf”. It’s an origin story for a horror hero called Zombie Grrl, whose name pretty much says it all. She rises from the grave to do battle with some baddie named Dr. Skull who is responsible for summoning the alien menace of the story’s title. Not bad, but definitely the weakest story in the issue.


Things get much better in the second story, “Christina”. This is a parody of Stephen King’s ‘Christine’ with kids and a go-kart instead of teens and a beat up classic car. Grown ups familiar with the original story will enjoy it on that level, while kids can take it at face value and still have a perfectly satisfying read. The scares are kept pretty tame, and there are plenty of kid appropriate laughs. Powell writes and Jake Smith provides the art.


Next up is my favorite story by far, “The Crud Kid”. This one is an absolutely beautiful tribute to Len Wein and Berni Wrightson, the creators of ‘Swamp Thing’, both of whom sadly passed away last year. And goddamn, does artist Kyle Hotz do an absolutely amazing job of capturing the essence of Wrightson’s art style. Fans of the seventies version of Swampy may well feel tears welling up when reading this. But again, like “Christina”, it works just fine on its own. Again, not too scary, and the humor is kid appropriate without feeling watered down.


Last but not least, Powell writes and draws “Our Big Sister is the Devil”, a parody of THE EXORCIST in which the cranky adolescence of Peg-Sue-Sue (get it?) is the result of Satanic possession. Thankfully her little brothers know where to get the answers they need to save her: Youtube. My son definitely related to that part. He also liked the fart jokes in this one, which is to be expected.


While part of me wishes Powell had illustrated the whole book, I can’t complain given the caliber of artists he works with here. Honestly, my only complaint is that ‘Spook House’ isn’t a regular monthly title. I read a fair number of kid friendly comics with my son, and most of them are licensed properties. For what they are, they aren’t bad, but there’s always a subtle corporate vibe to them. ‘Spook House’ feels like creators making fun, family friendly stories they feel something for. At least I’ve got three more issues to look forward to for now.
Posted by Bob Ignizio at 12:00 AM