31 Days of Halloween 2018: Bank Robbers Open Up 'The Vault' And Get More Than They Bargained For 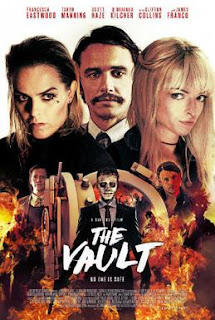 Amateur criminals find themselves in deep supernatural doo-doo when they pick the wrong bank to rob in THE VAULT. Turns out the particular financial institution they've chosen to pilfer was previously held up some 30 plus years ago. That crime ended in the deaths of many hostages when the robber went berserk. Now that another group of criminals have shown up and taken more hostages, the spirits of the dead arise to prevent history from repeating itself in violent fashion.


THE VAULT is straight-forward pulpy entertainment with a plot that can be summed up in a single paragraph. It isn’t a big budget film, but it's polished and professional looking. The atmosphere is suitably tense and creepy, there action scenes are well staged, and the kills come off effectively. And the cast, while perhaps not A-list, consists of skilled, recognizable actors, among them Taryn Manning (‘Orange is the New Black’) and James Franco (you know his resume, right?). Francesca Eastwood (daughter of Clint) acquits herself well in what I believe is her first lead role.


And yet, THE VAULT seems to be missing something. It’s reasonably entertaining while you’re watching it, but it won’t stick with you. It’s the sort of competently made but unremarkable movie that’s perfect for passing 90 minutes when you want to see something new but familiar that won’t make you think too much, but won’t make you feel stupid, either. Cinematic comfort food.


A more stylish visual approach from writer/director Dan Bush might have made for a more engaging and memorable experience without sacrificing the B-movie simplicity, but for most viewers I imagine this will work just fine as-is. I certainly didn’t feel like I wasted my time watching it. At the same time, it’s not like I would have missed out on some great cult classic by giving this one a pass. Should you check it out? Flip a coin, I guess.
Posted by Bob Ignizio at 12:00 AM