31 Days of Halloween 2018: 'Apostle' Is Intense And Intensely Thoughtful 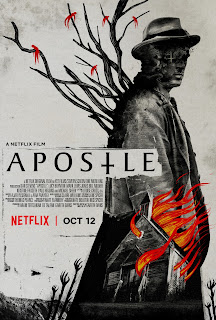 Well that was intense. Gareth Evans, the guy who brought you the greatest two-hour fight scene in the history of cinema with THE RAID: REDEMPTION, has now written, directed, and edited an action/horror film that gives this year’s MANDY a run for its money as most insane movie of 2018. APOSTLE is sort of a riff on the WICKER MAN pagan cult horror motif, but from a very different angle both thematically and visually. There are also way more kick-ass fight scenes.


Badly damaged both inside and out, Thomas Richardson (Dan Stevens) is charged with infiltrating the religious cult that has kidnapped his sister Jennifer (Elen Rhys) and taken her to their island where she is being held for ransom. That will not be an easy task, as Prophet Malcolm Howe (Michael Sheen) and his lieutenants Quinn (Mark Lewis Jones) and Frank (Paul Higgins) know there is an intruder on their island, and are willing to go to great lengths to find him. At least Thomas gets some help from Jeremy (Bill Milner), a young cult member involved in forbidden romance with Quinn‘s daughter Ffion (Kristine Froseth). He also has an unexpected ally, at least to some degree, in Malcolm‘s daughter Andrea (Lucy Boynton).

Where the pagans in THE WICKER MAN were depicted as happy and idyllic despite their penchant for burning pious police officers alive in large wooden effigies, the cultists here are anything but. The once bountiful harvests show no sign of returning despite the increasingly grisly sacrifices they have made, and life on the island is harsh and strictly ordered. Malcolm fancies himself as a benevolent leader in the mold of WICKER MAN’s Lord Summersisle, but he’s more like a Jim Jones or David Koresh figure; not completely devoid of sympathy, but deluded and dangerous nonetheless.


APOSTLE is not merely trying to paint pagan beliefs as evil, however. It’s not pagan earth religion that is evil, but the way it has been perverted by the cult’s patriarchal leaders. Rather than accept the gifts of nature as given, they instead imprison their goddess and seek to exploit her, making the film both an environmental and feminist allegory.


That these ideas are contained in a completely inside action/horror hybrid in no way undermines them. Things get very intense and very violent, and the film works just fine as a straight forward action/horror hybrid. But the visceral thrills of APOSTLE never undermine its subtext.


On a technical level, this is just amazing filmmaking. Evans had already shown with his second feature, THE RAID 2, that he could incorporate more plot and pacing into his work while still delivering plenty of action. Here the pacing is even more measured, but when the explosions of violence occur they have as all the more impact for it. Given the subject matter and themes, extended fight scenes like those in THE RAID and its sequel wouldn’t make sense, but Evans still manages to find a way to squeeze a couple of impressive battles into APOSTLE that show he still knows how to stage an action scene as well as anyone.


This is a film that is art directed to the hilt (kudos to Production designer Tom Pearce, supervising art director Ceinwen Wilkinson and their crew, and set decorator Sue Jackson-Potter). All the props and buildings have been carefully, beautifully designed while still looking as if they belong in the natural world. And Evans usual cinematographer Matt Flannery captures both the natural and supernatural of the film gorgeously, alternating between a dark, ominous color palette and a bright, naturalistic look reminiscent of seventies films depending on what the scene calls for.  And the score by Aria Prayogi and Fajar Yuskemal enhances the mood of the film by using both lush and melodic motifs and dissonant, experimental passages.


The cast is superb as well. Dans Stevens is a versatile actor whose likability comes through whether he’s playing a middle-class British heir adapting to the aristocracy and finding romance (‘Downton Abbey’) or a deranged American killing machine trying to teach two kids valuable life lessons even while he’s trying to kill them (THE GUEST). And I’m a big fan of Michael Sheen, known for playing former British PM Tony Blair multiple times, notably in THE QUEEN, but also willing to give just as much of his talents in cheese like the action/horror UNDERWORLD franchise.


It may seem incongruous that the men dominate a film with such strong feminist themes, but I’d argue it reflects the way men dominate (or try to) the culture the film depicts. And while she may not get as much screen time as Stevens and Sheen, Lucy Boynton (SING STREET, THE BLACKCOAT’S DAUGHTER) still manages to bring a real presence and strength to the supporting role of Andrea.


Be warned there is a fair amount of violence and gore. Nothing your average horror/violent action fan isn’t accustomed too, but probably a bit much for sensitive viewers as there is nothing cartoonish about it.
Posted by Bob Ignizio at 12:30 PM