Nostalgia gets dark in 'Summer of '84' (movie review) 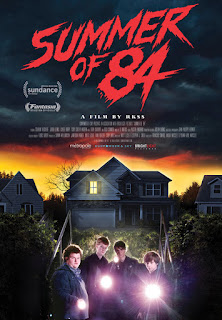 I absolutely loved Francois Simard, Anouk Whissell, and Yoann-Karl Whissell’s previous co-directorial effort TURBO KID, a spot-on homage to low budget 80s sci-fi/action films. That film had a sense of humor about itself, but never descended to the sort of “we’re so above it all” mockery present in similar efforts like KUNG FURY.

With their latest film SUMMER OF 84, the trio of filmmakers have decided to set their sights on a more reputable strain of eighties cinema, the sort of mainstream adventure films that Stephen Spielberg and his pals produced under the Amblin banner. Only SUMMER OF ’84 takes viewers to a darker place than those comparisons might lead one to expect. It just takes a while to get there.

As is mandatory in a film like this, the main characters of SUMMER are a quartet of bike riding adolescent boys living in suburbia. On the surface Ipswich, Oregon is perfectly safe and bland, but as paperboy Davey Armstrong (Graham Verchere) tells us in his opening narration, “it all might seem normal and routine, but the suburbs are where the craziest shit happens.”

Crazy shit is indeed going on, as there is a serial killer on the loose, and his victims have all been teenage boys. Because of various pieces of circumstantial evidence, Davey starts to suspect his next door neighbor, police officer Mr. Mackey (Rich Sommer), of being the culprit. Davey’s friends are skeptical. After all, the kid reads Weekly World News type tabloids and takes them seriously. But friends have each others backs, so they agree to help him spy on Mackey anyway.

Once the amateur sleuthing begins, it's pretty obvious how everything will play out. While the movie doesn't flat out say who the killer is until the final reveal, it doesn't go to much effort to keep the identity secret or offer additional suspects, either. Nor does it ramp up the tension enough to succeed as a thriller.

As for the characters, none of them rise above genre stereotypes – Davey is the “average” suburban teen who usually serves as the point of audience identification in movies like this, Tommy (Judah Lewis) is the troubled bad boy, Dale “Woody” Woodworth (Caleb Emery) is the fat kid, and Curtis (Cory Gruter-Andrew) is the geek/spaz of the group. There’s also the obligatory female fantasy object, Davey’s former babysitter and across-the-street neighbor Nikki (Tiera Skovbye). Sommer is a fine actor who does a decent enough job as Mackey, but with what he's been given he doesn't have much to make an impression with here.

On a purely technical level, SUMMER OF ’84 is great. I haven’t been able to find the official budget numbers online, but this is an indie production released through a small distributor, so I'm guessing it wasn't huge. Nonetheless, the movie looks slick and professional, the actors are all well cast, and everything feels “of the eighties” without coming across as trying too hard. Also of note, the filmmakers use synthwave group Le Matos, who also scored TURBO KID, for the soundtrack. Their electronic soundscapes definitely add to both the overall atmosphere and period feel.

What ultimately makes SUMMER OF ’84 a more worthwhile viewing experience than this review has implied up until now is the ending. I’m not going to get into spoiler territory here, but let’s just say I did not see it coming. And as much of a shock as it is, it feels absolutely fair and honest to what has come before, even as it subverts expectations and genre conventions.

If only SUMMER OF ’84 had made a few more bold moves. I get that following convention is part of what makes the final shock so effective, but surely the build-up could have been a little less generic without sacrificing much, if any, of the impact. At the very least, maybe the characters could have been fleshed out. Hell, maybe Nikki could have been given something to actually do in the movie other than just being a fantasy object for the boys. I know, crazy talk.

You probably get the idea by now that I have mixed feelings on this one. There are definitely aspects I liked, but not enough to make me want to be a full blown cheerleader for the movie. Even if I did want to shout its praises, it’s hard to say just who the audience for this might be. It’s too dark to work for the Spielberg crowd, but doesn’t have enough horror or suspense elements to compete in those arenas. I guess if I were Siskel or Ebert I’d say, “a marginal thumbs up”. Take that how you will.
Posted by Bob Ignizio at 4:53 PM