Into the 'Arena' with Duran Duran 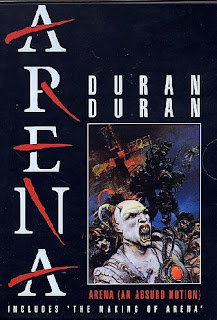 In 1985, English pop band Duran Duran (Simon LeBon, Nick Rhodes, and Taylors Andy, John, and Roger) were at the peak of their popularity. Back then I wouldn’t have been caught dead listening such a non-badass bunch, as it was about the same time my teenage identity solidified into that of “metal head”. And you can be darn sure I didn’t watch the hour-long concert film, ARENA (AN ABSURD NOTION), that the boys released that year. I wasn’t even aware the thing existed.

Times and tastes change, though, and these days I have more appreciation for Duran Duran. So when I recently stumbled across ARENA, I figured what the heck, I’ll take a look. It should be fun at the very least. Plus, I might score a few points with my wife, a long-time fan of the group.

I couldn’t possibly have imagined what was in store.

On one level, ARENA is meant to be a sequel to the 1968 sci-fi cult classic BARBARELLA. The villain in that film was named Durand Durand, which is where the band got their collective moniker. Having somehow survived his banishment to the 4th dimension at the end of the first film, old double D (Milo O’Shea, reprising his role) has been awakened by hordes of teenagers chanting his name. He’s thrilled until he discovers they’re not actually chanting for him, but for the band that stole his name.

So Durand Durand does what any mad scientist would do in such a situation. He straps stilts on his arms and legs, assembles a group of little people minions dressed in leftover costumes from MAD MAX: BEYOND THUNDERDOME, and sets out to sabotage a concert by his musical namesake. At various points this involves sexy were-tigers being set loose in the concert venue, robots making out in a pool of green liquid, cheap ALIEN chest burster knock-offs, and various female fans being kidnapped and put in cages and/or being suspended over plexiglass cubes of dirty water containing weird bald guys with breathing tubes.

At about the halfway point, ARENA  incorporates a full music video for the then-new studio track "Wild Boys”. Evidently this was intended as a teaser for a never finished adaptation of William S. Burroughs novel ‘The Wild Boys: A Book of the Dead’. Duran Duran would have provided a full soundtrack had the film been made.

Wikipedia describes Burroughs’ novel as being about “a homosexual youth movement whose objective is the downfall of western civilization”. I’ve read some Burroughs, but not ‘Wild Boys’, so I can’t say if there’s much resemblance to the source material. To these eyes, though, it’s just more of the same MAD MAX costuming and set design mixed with weird sci-fi monsters wrapped up in an aura of glossy forbidden sex.

With all this insanity going on, the concert portion of this concert film feels almost like an afterthought. It doesn’t help that Mulcachy decided to just jam the narrative segments smack dab into the middle of songs. This results in the music being obscured by dialogue and sound effects, and the dialogue and sound effects being obscured by the music. So, whether you come for a live Duran Duran show, or you’re partial to the surreal sci-fi storyline, you’ll be frustrated and annoyed either way.

Mulcachy’s trademark visual style of pastel colors and gauzy cinematography insures that ARENA has that distinctive Duran Duran “look” familiar from their videos. On the downside, though, his rapid-fire approach to editing is less effective here than it is in the music vids.

For what it’s worth, when ARENA does settle down to let us simply enjoy Duran Duran’s performance, the group sounds great. They play with a ton of energy and are every bit as charismatic and photogenic as their fans might hope. But just when you start to get into the groove, something weird pops up to break the spell.

It also bears mentioning that the song “Save A Prayer” is played in its entirety twice; once at the very beginning of the film, and again as the fourth song of the concert film proper. I’d say it‘s an odd directorial choice but, compared to some of the other decisions made in this film, it’s downright logical.

Ultimately ARENA (AN ABSURD NOTION) isn’t just absurd, it’s incomprehensible. Like so much entertainment produced in the eighties, one wonders how much of a role cocaine played in its conception and realization. Or maybe these guys were just so high on their own success they didn’t realize how self-indulgent they were being.

Mulcachy would go on to direct the cult sci-fi classic HIGHLANDER, as well as many other, mostly forgettable films (although I have a soft spot for his RESIDENT EVIL: EXTINCTION). Duran Duran has also continued in various configurations and with varying degrees of success, but they would never again reach the heights of their early eighties heyday. But at least these artistic collaborators left us with an odd little time capsule that’s good for a few unintentional laughs, and more than a few “what the fucks”.
Posted by Bob Ignizio at 2:44 PM