This interview originally appeared on the old Utter Trash website in August of 2004. Since that time, the late night "Big Chuck" and Lil' John Show was cancelled. There have been a few revivals of the program as a daytime show on weekends showing skits only, with Chuck and John still hosting. Check your local schedules.

With that in mind, this interview is presented as it originally ran. A few things are no longer relevant, but since this deals with Cleveland TV history, most of it still applies. Enjoy! 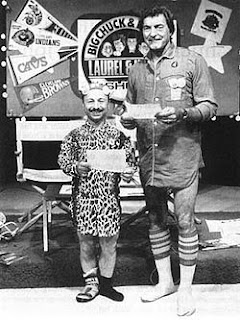 "Lil' John" Rinaldi has been the co-host of the Big Chuck and Lil' John Show on Cleveland's Channel 8 since 1979. Before that, when the show was known as the Hooliahan and Big Chuck Show, John appeared in numerous skits. While his first appearance on the show, in the music video for Ray Steven's "Bridget the Midget", made reference to John's short stature, other memorable skits have featured John as a caveman, an overworked engineer in a recording studio, and frequently as a put upon husband. Recently, John was kind enough to chat with Utter Trash about his life and career. Although he somewhat downplays his contributions to the show, any true Clevelander knows that for the last 25 years his energy and wit have been an integral part of the program he co-hosts with "Big Chuck" Schodowski.

UT: I’ve just been talking with Chuck about the history of the show, and I’d like to talk to you a bit about your contributions.
Little John: Not much. (laughs)
UT: That’s not true.

UT: So tell me how you got into doing the show?
LJ: It was a local dance instructor named Dick Blake. He does dance instructions, and manners, and everything. He came into the jewelry store I work at, and he saw that I liked to be funny. He says, “I know these guys, Hoolihan and Big Chuck.” I gave him my card and told him to give me a call. He called Chuck, and Chuck said he was looking for a little girl to be in the “Bridgette the Midget” sketch. Dick said, “I don’t have a little girl, but I have a little guy.” And that turned out to be me.

UT: You have the jewelry stores, Rinaldi Jewelry, and I remember seeing you working there when I was a kid and being really excited to see Lil’ John. Do you get a lot of people coming in to the store wanting to talk to you about the show?
LJ: Yeah. Not so much where I’m at now, because I’m in a little strip. But when I was in a mall, a lot of people would come in.

UT: Did they usually buy something?
LJ: Sometimes.

UT: Any favorite sketches you’ve done?
LJ: “Troglodyte” would be number one right off the bat, and “When You’re Hot You’re Hot”.

UT: What would you say is the main thing you bring to the show?
LJ: I’m the outside guy. Chuck’s the inside guy. He writes and produces, pulls the tapes and everything. I do everything that has to do with the personal appearances and whatever happens on the outside. If people get in touch with us and want us to come out to their events. It works pretty well.

UT: Did you have any hesitation taking over as co-host when Hoolihan left?
LJ: No, not at all.

UT: What’s the best thing that you’ve personally gotten out of doing the show?
LJ: Probably getting to meet a lot of interesting people, and getting to meet people in general that I wouldn’t meet otherwise.

UT: Is it still fun doing the show?
LJ: Oh, definitely. I have two fun jobs. The jewelry store is one, and TV is the other.

UT: Any favorite movies you’ve show over the years?
LJ: I like action movies. Especially at 2 o’clock in the morning. Like ‘Rambo’ and that. The ones you don’t have to think about. No deep meaning.

UT: Anything else you want to say to your fans?
LJ: Keep on watching. We love all of our fans.
Posted by Bob Ignizio at 1:34 PM