Movie Review: 'Legend of the Guardians: The Owls of Ga'Hoole' 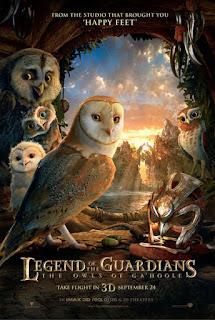 They may look cute, but the owls in The Legend of the Guardians: The Owls of Ga'Hoole engage in some decidedly un-cuddly behavior.  In fact, there's very little in the way of light-hearted anthropomorphic animal hi-jinks here.  Instead we get kidnappings, brainwashing, daring escapes, and epic battles between good and evil.  Nothing wrong with that in and of itself, but parents may want to consider whether their young ones are ready for such intense fare.
For slightly older kids and the adults accompanying them, this is fairly standard-issue heroic adventure stuff.  The plot sets owl brother against owl brother.  Soren (voiced by Jim Sturgess) gathers together a group of unlikely allies and learns how to “use his gizzard” (the owl equivalent of the force) from the wise old Ezylryb (voiced by Geoffrey Rush).  His brother Kludd (voiced by Ryan Kwanten) joins forces with The Pure Ones, a group of racist owls led by Nyra (voiced by Helen Mirren) and Metalbeak (voiced by Joel Edgerton).  And so the stage is set for the inevitable confrontation between good and evil.
The plot may be a bit familiar, but it's refreshing that the film doesn't overly sanitize it's feathered protagonists, allowing them to be the mouse-munching predators they are in real life.   Also praiseworthy is the way it tackles some fairly strong themes about how war and violence shouldn't be viewed as heroic; but rather as regrettable, if sometimes necessary, evils.  Of course a lot of that gets undermined by Director Zack Snyder (300, The Watchmen), who shoots the battle scenes like violent eye candy.  Essentially, the script has one point of view, the visuals have another, and no one seemed to feel it was necessary to reconcile the two.
Still, if nothing else Snyder knows how to make a visually stunning movie.  If you've seen a few CG kiddie flicks, you know they all look pretty much the same.  Not this one.  Legend of the Guardians creates a rich and unique world for its characters to inhabit.  It's a world that leaves one with a lot of questions, like how do owls craft extremely detailed helmets, or manage to strap such pieces of headgear on, but perhaps it's best not to think too deeply on these matters.  Oddly enough, despite the striking visuals, the 3D aspects of the movie aren't all that impressive.  If you're going to see this one, save yourself the extra couple of bucks and watch it flat.  2 ½ out of 4 stars.

Sounds like something I'd like to watch. Normally I hate animated films with talking animals, but what you mentioned about this one being different tells me Im not in for the same old crap. Which is great.

Thanks for the heads up on the 3-D!