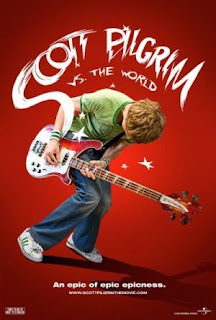 22 year old Scott Pilgrim (Michael Cera) is just getting over breaking up with his last girlfriend by dating an Asian Catholic high school girl named Knives (Ellen Wong).  However, Scott soon finds himself attracted to the roller skating, hair-dyeing, super cool Ramona Flowers (Mary Elizabeth Winstead), literally the girl of his dreams.  After orchestrating a “meet cute”, Scott manages to get a date with Ramona.  There’s a catch, though.  If Scott wants to date Ramona, he has to do battle with her seven “Evil Exes”.

This is a movie steeped in modern pop culture, especially comic books, video games, anime, and indie rock.  Sound effects appear as stylized lettering.  Fight scenes have characters jumping towards each other with lines trailing behind them like in anime, the losers bursting into video game coins that add to the victor’s score.   Little text pop-ups appear to help explain back story and plot points.  It’s all driven by a soundtrack of ragged post punk and throbbing techno.  In the hands of a lesser director, this could be very annoying.  Luckily Scott Pilgrim was helmed by Edgard Wright of Shaun of the Dead and Hot Fuzz fame.  While Wright is certainly capable of arresting visuals when he needs to be, his strong suit lies in characterization and story telling.  Plus he really gets pop culture and the fanboys who obsess over it, as he proved in two seasons of the BBC comedy series Spaced.

This summer has been dominated by sequels, remakes, and rip-offs, so Scott Pilgrim vs. the World really stands out as one of the few true original movies of the season.  It’s smart, funny, and visually inventive, and despite being a total fantasy, a film that has more truth at its core than many supposedly more realistic films.  The fact that this movie works so hard to speak accurately to a particular subculture is sure to secure it a loyal following on the one hand, while alienating and baffling wider audiences on the other.  Still, provided you speak its language, Scott Pilgrim vs. the World is some kind of masterpiece.  3 ½ out of 4 stars.
Posted by Bob Ignizio at 12:01 AM

Hooray. I was interested in seeing this movie but very tired of Michael Cera playing the same part over and over and over again. So I'll take 3.5 stars to mean it'll be good stuff.