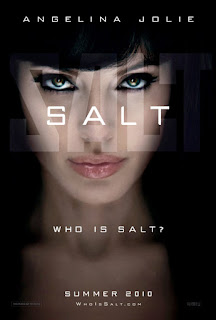 Take one part Bond, one part Bourne, and one part Manchurian Candidate, season liberally with Angelina Jolie, and that’s pretty much Salt.  The plot concerns Russian sleeper agents left over from the cold war.  Even though the is gone, these sleepers are still dedicated to their mission, hoping to restore their country to its “evil empire” glory days.  We learn this when CIA agent Evelyn Salt (Jolie) interrogates a Russian defector named Orlov (Daniel Olbrychski).  Orlov also claims that Salt is one of these sleepers, and that she has been activated to assassinate the Russian president.  With her husband (August Diehl) very likely in danger, Salt decides she can‘t wait to clear her name, escaping from custody with her boss Ted (Liev Schreiber) and CIA internal affairs agent Peabody (Chiwetel Ejiofor) in hot pursuit.

Salt was directed by Philip Noyce, an experienced, workmanlike filmmaker who made his mark with thrillers like Dead Calm and a pair of Tom Clancy adaptations (Clear and Present Danger and Patriot Games).   He’s not exactly what you’d call an auteur, but given the right materials to work with he’ll turn out a decent movie.  He’s got a fine cast and crew on Salt, but the script feels like it’s made out of parts from other movies that have been recycled one too many times.  That might not be so bad if the action scenes were spectacular enough to compensate, but they’re not.  Noyce handles the chases, stunts, and fights in Salt competently, but there isn’t one sequence that stands out as anything special.  The most interesting thing about Salt is Jolie’s character.  Her back story is the one part of the script that holds any real interest as it gets doled out in bits and pieces, leaving the audience wondering whether she’s the hero or the villain.  The movie doesn’t suck, but one can’t help but feel this character deserved better.
Posted by Bob Ignizio at 10:57 PM

Angelina Jolie is on my list of people to punch in the face if given the opportunity.

So it's one hair above mediocre? Meh, no thanks. I wish Jolie could really strut her stuff in a good action movie, though.

So what you're saying is that Salt leaves us looking for the pepper? ;-)

@ James - I thought of using a pun that painfully bad, but somehow managed to stop myself. I'm not entirely sure I made the right decision.