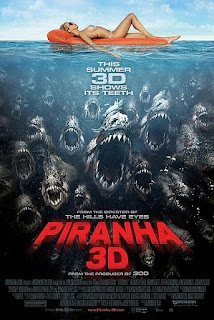 Piranha 3D starts out promisingly enough with a pre-credits scene featuring Richard Dreyfuss while a certain familiar song plays.  It’s a clever, amusing cameo that sets just the right note of knowing campiness.  Sadly, it’s mostly downhill from there.  Nobody expects a movie like this to be anything deep or even particularly good.  All it has to be is fun.  For me, this wasn’t.  Piranha 3D certainly tries, but it tries too damn hard.  The violence and gore is so over the top and mean spirited that it’s hard to have much fun with it.  And despite copious female nudity and “Girls Gone Wild” style shenanigans, it’s all too in your face to offer much in the way of naughty, sexy thrills.  There’s none of the rebellious, anarchic feel of classic seventies drive-in movies.  This is more like an adolescent school boy trying to shock his elders, and it just becomes numbing after a while.

You can’t really put the blame on the screenplay.  While nothing special, it has a serviceable enough plot for a creature feature.  Nor is the cast at fault, as stars Elisabeth Shue, Steven R. McQueen (grandson of Steve McQueen), Ving Rhames, and Christopher Lloyd all turn in solid performances.  No, the responsibility for the film’s failure rests squarely on the shoulders of director Alexander Aja.  He hits all the wrong notes here, shifting tone jarringly and often.  He proves here that he’s completely incapable of balancing horror, humor, and drama the way Joe Dante did in the original 1978 Piranha.  And on a final note, even the 3D sucks.  When it was shot, Piranha 3D was intended as a traditional 2D film.  It only became 3D in post production, so there’s not much creative use of the gimmick.  2 out of 4 stars.
Posted by Bob Ignizio at 12:01 AM