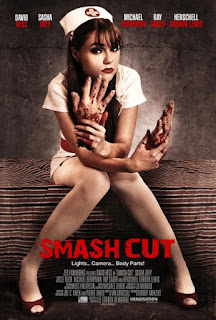 Able Whitman (David Hess) is a horror movie director whose films are loathed by critics and fans alike.  His bargain basement special effects in particular are singled out for their phoniness.  Driven over the edge by constant derision, Able comes up with a novel solution for improving his gore scenes:  using real human blood and body parts.  In order to keep his supply of blood and gore well stocked, Able starts killing his critics and anyone else who gets in his way.  Meanwhile, local television reporter April Carson (Sasha Grey) has been investigating her sister’s disappearance with the assistance of private eye Isaac Beaumonde  (Jesse Buck).  The clues all lead to the mad director, so April takes the lead role in Able‘s new film hoping to get some answers.

Directed by Lee DeMabre (Jesus Christ Vampire Hunter), Smash Cut is a loving homage to/rip-off of H. G. Lewis’ 1965 gore fest Color Me Blood Red.  Star David Hess, best known for playing sleazebag Krug in the original version of Last House on the Left, displays a real knack for comedy here.  Sadly the same can not be said for his co-star, porn star Sasha Grey, in her first mainstream role.  The only knack she seems to have is for imitating a two by four (that’s my clever way of saying she’s wooden).  Grey got better in her second mainstream flick, Steven Soderbergh's The Girlfriend Experience, but that doesn't help us here. Luckily the rest of the cast, including genre veterans Michael Berryman, Ray Sager, and even H. G. Lewis himself in a small role, pick up the slack.  No, it’s not a great movie, and the script won’t win too many points for originality.   But if you’re looking for something fun and trashy to watch with your friends and a few beers on a Friday night, Smash Cut has more than enough laughs and gore to satisfy.  2 ½ stars out of 4.
Posted by Bob Ignizio at 12:11 PM