Movie Review: 'Predators' goes in for the kill 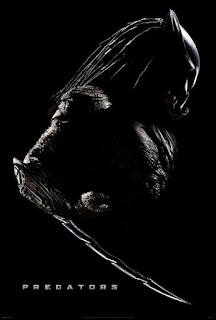 The original 1987 Predator was about a group of mercenaries in the jungle being hunted by the meanest, ugliest space Rastafarian of all time.  That about sums up the plot of Predators as well, but as the plural nature of the title suggests, this time there’s more than one monster on the hunt.  There are some other changes to the formula which I won’t divulge (even though the trailer already gives away one of the biggest surprises), but Predators isn’t likely to win too many points for originality.  But as the great Joe Bob Briggs has often said, if you’re gonna’ make a sequel, do it right and make the exact same movie, and that’s pretty much what producer Robert Rodriguez and director Nimrod Antal have done with Predators.

Predator star Arnold Schwarzenegger is otherwise occupied these days, so this time around we get Adrien (The Pianist) Brody in the lead.  It seems like an odd casting choice at first, but Brody proves more than capable of delivering gruff, monosyllabic dialog with the best of them.  Other choice game for the Predators’ hunt includes Alice Braga as a U.S. Special Forces soldier with a conscience, former UFC fighter Oleg Taktarov as a gatling-gun toting mercenary with a soft spot for his kids, Topher Grace as a seemingly out of place doctor, and Danny Trejo as Danny Trejo.  Lawrence Fishburne shows up later as a survivor from a previous hunt who’s been left a little unbalanced by his ordeal.

Director Nimrod Antal, who helmed last year’s highly enjoyable ‘B’ action flick Armored, is absolutely the right man for this job.  He approaches this material without pretension or condescension, and knows how to stage an exciting action scene so that you can actually tell what’s going on.  There’s no shaky cam, fast editing, or hyper stylized music video bullshit here.  There’s also not a lot of blood and gore compared to other recent R-rated action flicks like Rambo, but there is one gleefully messy showstopper where a Predator rips someone’s head and spinal column right out of their body and swings it around.

Since the Predator franchise has become inextricably linked with the Alien series via the Aliens vs. Predators films, it’s hard to avoid comparing Predators with Aliens.  Well, there is no comparison.  Aliens is a classic.  This is just a meat and potatoes action flick.  It’s not aiming for greatness; just good, solid entertainment.  And there’s nothing wrong with that.  No doubt nitpicky fanboys can find things to bitch about, but for anyone just looking for a good action-packed time at the movies, Predators easily hits its mark.  3 out of 4 stars.
Posted by Bob Ignizio at 9:44 PM