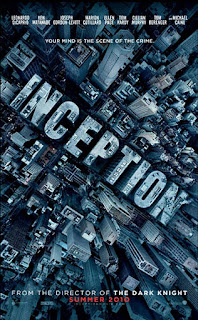 I saw Christopher Nolan’s Inception over a week ago.  I probably should have written a review by now, but to be honest, I just didn’t feel compelled to say anything.  Even now, I don't even feel compelled to come up with a witty title for this post.

For a movie that takes place largely in the realm of dreams, Inception is shockingly devoid of imagination.  Neither is it a film with much in the way of emotional resonance.  Even with a cast that includes such acting heavyweights as Leonardo DeCaprio, Ellen Page, Michael Caine, Joseph Gordon Levitt, Ken Watanabe, Marion Cotillard, and Cillian Murphy, there’s nothing to any of these characters that makes us care about them.  If we’re pulled into Inception at all, it’s only because we’re waiting to see what the big twist is going to be.  It’s an idea in search of a movie.  A great looking, technically well executed idea in search of a movie, but nothing more than that.

This is also yet another movie that clocks in at well over 2 hours without any good reason for doing so.  Nolan is just being self indulgent here, and because he’s made the studio so much money with his Batman movies, no one was willing to rein him in.  For me, that results in a pretty dull movie.  It doesn’t take me anywhere I haven’t already been in other, better films about the mind like The Matrix, Synecdoche, New York, Eternal Sunshine of the Spotless Mind, or The Fall, just to name a few.  2 out of 4 stars.
Posted by Bob Ignizio at 1:12 AM

Ah, I've been waiting for your review! Not exactly what I expected, but that's fine. While the other movies you mentioned were better films (except The Matrix), I found myself liking this quite a bit more than you did. Perhaps not quite as much as Roger Ebert, but he and I share more common ground. I didn't feel it was hollow or masturbatory, and while it was definitely not on par with the more art-house Synecdoche, this was an unexpectedly fun and mentally engaging summer flick.

Cool review Bob. Liked the action parts but some of it did drag. Too much explanation I think but I did find myself caring about Leo and his relationship with his wife. P.J. fell asleep during the movie, as he does during longer movies that don't hold his interest as much, so you can tell what his opinion was. Cute though because he said he was trying not to dream in a movie about dreaming ;-)