Don't look directly at this 'Eclipse' 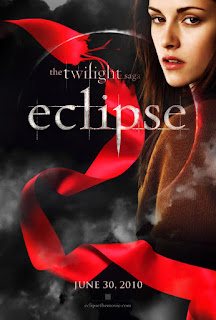 Warning:  This review contains lots of spoilers.  Read at your own risk.

Last year’s installment of the Twilight saga, New Moon, was by no means great cinema.  The characters were just as bland and the dialog just as banal as in the first Twilight film. However, New Moon boasted a more interesting story and stronger direction than its predecessor.  It successfully moved the plot of forward, developed the characters and their relationships, and had a fair amount of action to boot.  If there was one major flaw, it was that it tried to fit too much into a two hour movie.  The third act in particular felt rushed, with several new developments and characters introduced with little explanation.  Still, it was an improvement, and for the most part a reasonably entertaining bit of romantic fantasy.

Eclipse, on the other hand, spends most of its running time spinning its wheels as Bella (Kristen Stewart) agonizes over her love triangle with vampire Edward (Robert Pattison) and werewolf Jacob (Taylor Lautner).  Dialog is not the strong suit of this series, so its especially painful when Eclipse gives us scene after scene of these three talking to each other about their feelings.

Not only is Eclipse dull and vapid, it’s redundant.  These exact same relationship issues were already covered in a much more concise manner in New Moon.   At that film’s conclusion, things seemed to have been settled.  Bella agreed to marry Edward after high school graduation, and he in turn promised to make her a vampire.  All this just so the two of them could finally get laid.  Seems like an awful lot to go through for a little action, but whatever, it was settled.  But Eclipse doesn’t know what else to do, so it just has the characters rehash the same tired arguments we already heard last time around.  All just to end up at exactly the same place.

There’s also a subplot about a bunch of “newborn” vampires showing up nearby.  We’re told these vamps are young and hungry and especially strong.  Victoria (Bryce Dallas Howard), the red-head vampire whose boyfriend was killed by Edward and his family in the first film, is creating the newborns as part of a revenge plot.  Evidently this is so scary that Edward’s vampire coven and Jacob’s wolf pack agree to put aside their centuries of hatred and work together.  But just like Bella’s romantic relationships, it’s all tease and no pay off.   When the big confrontation finally takes place, it’s not a fight, it’s a massacre.  A couple werewolves get hurt, but thanks to their accelerated healing abilities even broken bones aren’t much more inconvenient than a hang nail.

The movie also wastes time on the back stories of two minor vampire clan members.  None of what we learn about these characters is of particular importance, and all these flashbacks accomplish is to make the film drag on even longer.  That time would have been better spent building up and her protégé Riley (Xavier Samuel), since as it stands the villains of this piece are sorely lacking in presence or interest of any kind.

There’s no need to go into all the little nitpicky things about this movie that grate on the nerves, of which there are plenty.  The bottom line is, this particular installment of the saga does absolutely nothing except draw it out to rake in more cash from the devoted.  Not only is it lacking in any kind of dramatic interest, director David Slade can’t even muster up any compelling visuals.  It’s a mystery that the biggest cash-cow film franchise currently in existence would release such a half-ass place holder of a film, but that’s what we have here.  Even if you’re a fan, you’re not missing much by skipping this one.  dies.  That’s the only thing that happens in this movie that you’ll need to know going into the next, hopefully more eventful, installment.  1 out of 4 stars.
Posted by Bob Ignizio at 10:28 PM

The things you endure, Bob. May FSM bless you in your cinematic anguish.

It was the worst book in the series also. I'm interested to see how "Breaking Dawn" plays out in it's 2 film format. Because that was one long ass book jam-packed with material. My brain still aches from reading it twice.