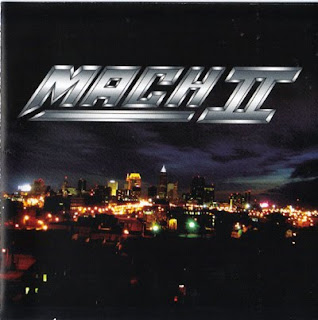 Mach II is the latest project from Jamie Walters (, Destructor, , etc).  This time around he’s going for something in the vein of seventies/early eighties style hard rock like UFO, Deep Purple, KISS, and Thin Lizzy.  Joining Walters is fellow ex-Boulder guitarist The Chan, Soulless axeman Wayne Richards, Maiden Voyage drummer Blackie Pisarek, and vocalist Michael Sorg.  This is the first I've heard anything from vocalist Sorg.  He's by no means polished, but the guy can actually sing.  His voice is kind of like a cross between Ian Gillan and Molly Hatchet vocalist Danny Joe Brown.

As for the songs, killer riffs and tasty leads abound  and the rhythm section is rock solid.  There’s a definite sense of humor to the lyrics of tracks like “Demon Queen” and “Whiskey Lady Love”, but the band  never crosses the line into parody or obnoxious hipster irony.  These guys all clearly love and respect this kind of music; they just don’t feel the need to take themselves too seriously.  Mach II is definitely not for those who get all snooty about rock music and talk about boring stuff like "relevance" or "breaking new ground".  Me, I just want good, catchy songs that rock my ass, and in that respect this album more than delivers.

For ordering information and to hear a few tracks for yourself, visit the band's Myspace page.
Posted by Bob Ignizio at 4:10 PM