The birds, the bees and the mutants in Frank Hennenlotter's 'Bad Biology' 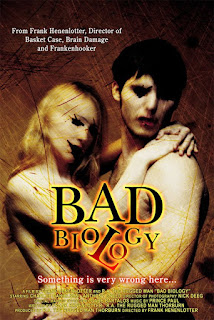 Frank Henenlotter, the man responsible for such twisted cult classics as Basket Case and Frankenhooker, finally returns to filmmaking after an almost 20 year hiatus with Bad Biology.  The screenplay, co-written by Hennelotter and producer R.A. Thorburn, revolves around two people afflicted with strange mutations, a recurring theme in Hennenlotter’s films.  However, the sexual subtext that bubbles just beneath the surface of previous works like Basket Case and Brain Damage is brought to the surface here.

Bad Biology focuses mostly on Jennifer (Charlee Danielson), a woman born with seven clits.  Her orgasms are so intense that she occasionally kills her partners while in the throes of ecstasy.  After sex, she almost immediately gives birth to mutant babies, which she casually discards.  To her, they aren’t “real” babies because they gestate so quickly.  Jennifer is convinced that her mutation is proof she is destined to have sex with God himself.  Despite being delusional and a homicidal nymphomaniac, she still manages to hold down a steady job as a photographer.

Our other mutant is Batz (Anthony Sneed).  When he was born, it seems they missed the umbilical cord and snipped something else in the vicinity.  The doctors managed to sew him back together, but the accident left Batz impotent.  Through a highly unorthodox regimen of pills and injections Batz has managed to cure himself, but not without side effects.  His schlong is about two feet long and has a mind of its own.  Up till now, Batz has been able to keep his massive member in check with more drugs and a heavy-duty masturbation machine, but those measures are becoming less effective.

Hennenlotter has always maintained that he doesn’t make horror movies, he makes exploitation films, and that’s never been more true than here.  Bad Biology has no interest in traditional scares or gross-outs, opting instead for excessive nudity, sick humor and general weirdness.  It should be a hoot, but it just doesn't quite connect.  The movie takes its time building to Jennifer and Batz getting together, only to give us an ending that's just, well, anticlimactic.  Danielson also seems miscast in the lead.  She's just doesn't have a knack for this kind of over the top comedy.  Bad Biology is still an okay time waster provided your sensibilities are warped enough, and it's nice to have Hennenlotter back, but I was really hoping for something more after all this time.  2 1/2 out of 4 stars.

Bad Biology is out now on DVD and Netflix instant view.
Posted by Bob Ignizio at 3:21 PM