The water's fine in 'Blood Creek' 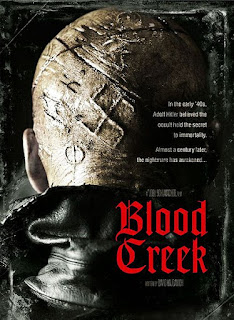 Lionsgate dumped Blood Creek (originally titled Town Creek) unceremoniously into budget theaters for a "doomed from the start" one-week run last September.  The last time they did something like this, it was the Clive Barker adaptation Midnight Meat Train.  In that case, it was apparently a matter of studio politics (for more info, click here).   Not sure if that was the case here, but either way Blood Creek is now out on DVD and Blu Ray, and I figured I'd give it a chance.

The movie begins with a black and white sequence set in 1936.  Nazi scholar Richard Wirth (Michael Fassbinder) arrives at the home of the Wollners, a family of German immigrants living in , to study a strange rune stone on their property.  Flashing forward to the present, paramedic Evan Marshall (Henry Cavill) is trying to get on with his life after the strange disappearance of his Iraq War veteran brother Victor (Dominic Purcell) 2 years ago.  Evan assumes his brother is dead, but then one night Victor shows up looking like Grizzly Adams after a week spent guzzling moonshine and rolling around in bear dung.  The two load up on guns and ammo and set out to get some payback.

Turns out Victor’s captors were the Wollners, still alive and looking pretty good despite the passage of some seven decades.  Wirth is still alive as well, at least in a manner of speaking.  In his quest to open up his third eye and achieve immortality, the Nazi necromancer has become some kind of zombie/vampire, keeping the Wollners frozen in time through black magic and forcing them to provide him with blood.  The Wollners daughter Liese (Emma Booth) tries to explain to Victor that it wasn’t personal.   Although unable to kill Wirth, Liese can at least keep him contained as long as he’s fed.  Vic isn’t interested in arguments about the greater good, though.  He’s just pissed about having been turned into a living food dispenser.

Wirth cuts a strikingly horrific figure with his dirty bandage swathed face, fashionable Nazi trench coat, and talon-like fingernails.  And not only is he a blood drinking zombie who can punch right through your stomach, he can also cast spells to raise the dead, even animals (watch out for those zombie horses).  Definitely not a monster you want to trifle with.  There’s not much room for nuance in a performance like this, but Fassbinder is everything you’d want in a pulp horror villain.  As for the rest of the cast, there are no real standout performances here, but the acting is more than adequate for a B-grade flick like this.

After the marginal freshness of the initial set-up, the plot settles into familiar siege-horror territory.  Sure, we’ve seen this kind of thing before, but Director Joel Schumacher maintains a high level of tension throughout.  He never forgets that this is a horror movie, and the camp tendencies that earned him the ire of fans with his two Batman films are thankfully absent.  Schumacher also gives Blood Creek a nice look and style without going overboard like some of the music video hacks that fancy themselves movie directors these days.   Blood Creek isn’t a horror masterpiece by any means, but it is an enjoyable bit of pulpy trash, and that’s more than I can say for a lot of recent horror films.  3 out of 4 stars.
Posted by Bob Ignizio at 2:18 PM

I've been wanting to check this out for awhile - thanks for reminding me that it's out there. If nothing else, it's got to be better than the new Nightmare on Elm Street!

Damn dude, I just took a huge dump on this one over at my blog! I hated it, I only liked the make up, the villain himself was cool looking and all, but the movie was a disaster in my book! Bad editing, storytelling, script, lighting...

@ FC: Sorry you didn't like it. I thought it was fun and reasonably well made, but no two people ever really see the same movie.