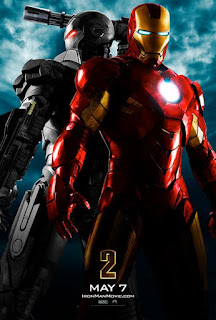 This is a movie about a guy who flies around in a suit of armor and fights another guy who smashes things with giant electrified whips and controls an army of robots.  It’s a popcorn movie, but it’s better than most popcorn movies thanks to a script by Justin Theroux that is at least as engaging, if not more so, when things aren’t being blown up as when they are.  It’s a film that actually understands the importance of pacing and character development, even in a modern action movie.  If you liked Transformers 2 you’ll probably think this drags.

Once again Robert Downey Jr. looks like he’s having the time of his life playing millionaire/superhero Tony Stark.  Gwyneth Paltrow also returns as a Stark’s assistant turned CEO Pepper Potts, and Don Cheadle takes over from Terrence Howard as Stark’s friend James Rhodes, who gets a metal suit of his own this time.  New to the film, and giving it the sort of strong villainous presence the original was lacking, is Mickey Rourke as Ivan Danko, the guy with the electrified whips I mentioned earlier.  Rounding out the primary cast are Scarlett Johansen, Sam Rockwell, and Samuel L. Jackson.

I was a bit worried when I saw the trailer that Iron Man 2 would get bogged down with too many heroes and villains.  Thankfully director John Favreau does a fine job balancing all these characters, keeping the focus on ’s Stark and his internal struggles.  I’ve no doubt some of these characters were added to the mix mainly to have another action figure to sell, or in the case of ’s Nick Fury, to set up future movies.  Whatever the motives, these characters are all integrated smoothly in a way that actually supports the main storyline rather than clutters it.

Iron Man 2 is not great art, and it has no pretensions of being such.  It’s corporate product based on what are essentially soap operas where the characters wear funny costumes and punch each other.  Sometimes that’s the kind of movie I want to see, and Iron Man 2 is a easily one of the better films in the genre.  It manages to be fun without being too incredibly loud, stupid, or annoying, and if you think that’s a small achievement, you haven’t seen many action movies lately.  3 ½ out of 4 stars.
Posted by Bob Ignizio at 8:01 PM

I like that it struck the perfect balance between appealing to the comic fanboys and the "others" who wouldn't have the patience to entertain the usual plot twists and multi-character developments so often seen in print. Smart integration, as you've said, really boosts this flick.

But what if they sewed 3 Iron Men together mouth to anus? Now that would make for some provocative filmmaking!