'The Human Centipede' gets a leg up on the competition. 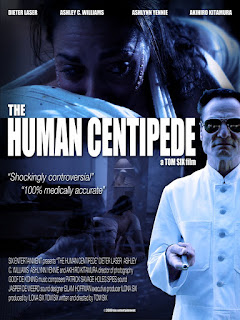 Dr. Heiter (Dieter Laser) is a retired German surgeon who used to specialize in separating Siamese twins.  But retirement can get boring, so it’s good to have a hobby.  Dr. Heiter’s hobby is trying to surgically connect three people together, mouth to anus.  Why would anyone want to do this?  I don’t know.  Why were Bela Lugosi and George Zucco always trying to transplant human brains into the bodies of gorillas in those poverty row horror flicks from the thirties?  Because they were mad, that’s why.  And without a doubt, Dr. Laser is bat-shit crazy, too.  No further explanation is needed, or given.

No doubt some will be so put off by the basic concept that it won’t matter how well executed the film is.  That said, writer/producer/director Tom Six shows a great deal of restraint.  The most disgusting and depraved ideas put forth in his script are suggested rather than shown.  Because of that restraint, when Six does show the audience something nasty, it’s all the more effective.

Six also creates a disconcertingly beautiful look for his film.  Rather than follow the dark and dingy lead of extreme horror films like Saw and Hostel, The Human Centipede utilizes a palette of crisp, bright pastels, mostly greens and blues.  Much of the film takes place in the warm, sunlit outdoors, creating a strange but effective contrast between the pleasant setting and the twisted activities going on.

Much credit should also be given to the actors.  Ashley Williams and Ashlyn Yennie begin the film as stereotypically annoying party girls.  In a traditional slasher flick, they’re the kind of characters you’d be rooting for the killer to dispatch.  Here, they’re given the opportunity to become more sympathetic and human once they’ve been taken (way) out of their comfort zones.  Williams especially manages to convey a great deal with just her eyes and the occasional gesture.  Akihiro Kitamura is also quite good as the man chosen to be the head of the centipede.  And all the actors deserve a round of applause for putting up with the physical difficulties of playing a human centipede.  It’s certainly not a position I’d want to spend too much time in because, let’s face it, accidental farts do happen.

As for Laser, his Dr. Heiter joins the ranks of the greatest movie mad scientists of all time.  He manages to maintain an aura of dangerous menace throughout, even when providing moments of black humor.  Sure, he’s cartoonish and over the top, but that’s what you want in a good mad doctor.  My favorite parts of his performance are when he gets frustrated by his creation’s refusal to behave, or his annoyance at interlopers disturbing his experiments.  I was reminded of Gunnar Hansen’s Leatherface displaying similar frustration with the teens that keep showing up uninvited at his house in The Texas Chain Saw Massacre.

What I really appreciated about this film is the fact that Six had a kooky idea, wrote his script, and then made exactly the movie he wanted to make.  That’s a rarity not just in horror, but in all movies in this age where everything gets run by an army of suits in pre-production, and then tampered with some more after test screenings.  Whatever else you can say about this movie, it is the unfiltered vision of its maker.  I found that vision refreshingly original and, oddly enough, kind of fun.  It’s also disgusting and disturbing, and a couple of scenes made even this jaded horror fan wince.  But isn’t that what a horror movie is supposed to do?  3 out of 4 stars.
Posted by Bob Ignizio at 6:00 PM

bummed we could not see it this weekend :(

It's not often you read a movie review with the phrases "mouth to anus" and "accidental farts". I give this review 4 out 4 stars.

Still wary about seeing it though.